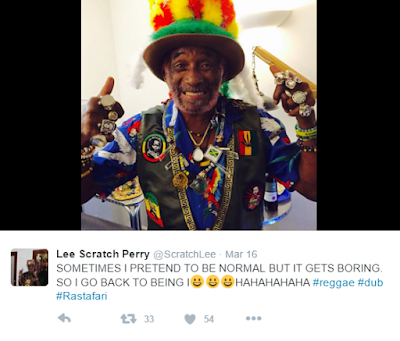 The mighty Lee Perry turns 80 tomorrow and to celebrate here's one of my favourite Scratch vocals. 'Jah Jah Ah Natty Dread', from 1978's 'Return of the Super Ape' LP isn't his best song, production or performance, but it always makes me smile. Musically it's oddly clunky and primitive. The band sounds as though they might have heard of reggae at some point, but have never actually played it before - this is The Upsetters though, so one assumes that they're deliberately trying to sound that way. Then there's Lee's vocal, barked like an irate market trader and barely pausing for a massive sneeze just short of the two minute mark. It's all reassuringly bonkers - and we wouldn't have him any other way. Happy birthday Scratch!

Hear hear! So nice to be celebrating a legend getting older rather than mourning their death! Here's also hoping he gets his studio sorted out soon, after the fire.

Thanks Marie! (Where's your blog by the way? I headed over there with a coffee this morning and there you were...gone!)

Love your description of the Upsetters.
Swiss Adam

As The Robster says, makes a nice change from things going the opposite way.
Happy birthday, Mr Perry. Utterly bonkers!