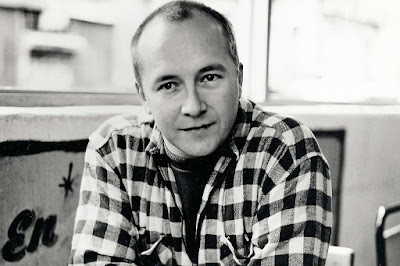 It barely seems possible that 10 years have passed since Grant McLennan's untimely death, at the dreadfully early age of 48. To mark the day, I direct you to two of my own favourite performers, both personal friends of Grant. Peter Walsh fronts The Apartments, a band I've been listening to since 1984. If you haven't yet picked up on last year's magnificent 'No Song, No Spell, No Madrigal', you should really make it your business to do so. Peter wrote a generous and moving piece about Grant six years ago and republished it today - read it here.

My admiration for Ed Kuepper's music knows no bounds. I've gone whole weeks of my life listening to nothing but his records. 'Finding You' originally appeared on 'Oceans Apart', the final Go-Betweens LP, in 2005. Ed recorded his own version the song for the 2007 Grant McLennan tribute album, 'Love Goes On'.

Man, 10 years. I really loved 'Oceans Apart.' You have to think there were many more great albums from Go-Betweens on the horizon. I somehow missed that tribute album you mentioned and just looked it up. The Orchids, Phil Wilson, the Clientele, Luke Haines... I'll be finding that one later today.

I can't believe - 10 years. Good to remember him. And Ed Kuepper is probably one of the most underrated artists. Love his records as well as The Laughing Clowns.