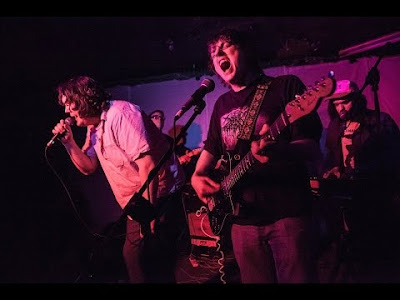 The bruised legitimacy of Euan Hartley's vocal delivery attracted me immediately - think Wild Billy Childish meets Wreckless Eric. The rest of the Pit Ponies aren't slouches either. The band, who formed in 2013, come straight out of Upminster and, from what I can gather, have so far rarely ventured outside of the M25 in a live capacity. They are playing at Liverpool's Sound City Festival next week though, so perhaps more nationwide shows are on the horizon. Their début LP, 'Magnificent Second Occupation', was released last Summer on the, always worth investigating, Trashmouth Records, though I only belatedly bumped into it in January. They're calling what Pit Ponies do 'Upminster Soul' - and why not? Check out the whole LP here.

Really like what I'm hearing. Off topic a bit, but did you know Wreckless Eric is married to Amy Rigby, lives in upstate New York and, most importantly, put out a rather enjoyable album last year? If not, now you're caught up.

Thanks Brian. 'amERICa' is indeed a very fine album. Marc Riley on 6Music is also a big fan of Eric (& Amy), they've performed several live sessions for him over the years.

Liking it. I'll tell The Number One Son to look out for them in Liverpool - he's helping to curate Sound City next week.