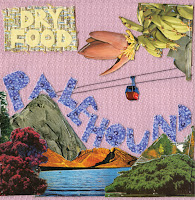 Ellen Kempner has been trading as Palehound since 2013, originally as a solo vehicle, but latterly in a bona fide band configuration. Palehound's very fine début LP, 'Dry Food', was issued in the USA last August, though only received an official European release, on Heavenly Records, as recently as March of this year.

Here's the official (and slightly disturbing) video for 'Molly', together with a performance of 'Healthier Folk' recorded during the band's Audiotree live session at the end of 2015. Check out the full 6 song session (plus more of Ellen's music) here.

That video's a bit creepy, isn't it?

I didn't know where else to say it but I just listened to Huw M while doing the dishes. Simply beautiful, Swede.

Shes's good, think I will just go and have an omelette