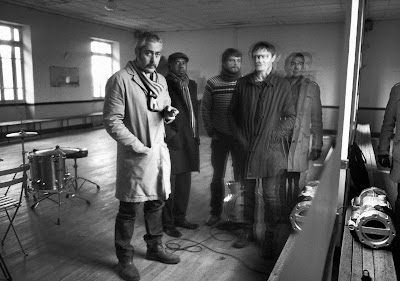 Apparently, it's been 20 years since I last saw Tindersticks in concert. Blimey. Sometimes I really do struggle with this passage of time thing. In the interim the band released several great records, took a hiatus, reconvened in a slightly amended form and then released more great records - 2008's 'The Hungry Saw' and 2010's Falling Down a Mountain' being particular favourites around these parts.

This year Tindersticks released their 11th LP, 'The Waiting Room' and to compliment the album, the band created a short film for each of the 11 tracks. For the second set of their performance last night, they played 'The Waiting Room' in sequence, as the films were projected onto a giant screen behind them. In spite of one brief technical hitch, it was pretty jaw-dropping stuff.

This is 'We Are Dreamers!', featuring Jehnny Beth of Savages on backing vocals.

I really love Tindersticks. It is not music for everyone but one of my options listening to them later in the evening. Great music for finishing the day.

Glad you have Karl Blau on heavy rotation, Swede

I can't get enough of The Waiting Room! We Are Dreamers is one of my favorite tracks so far this year.

I just love gthem Tindersticks. I have to say I skipped thru the new one and nothing really stuck. I think it is only fair I revisit, they deseve better from me!

Just listened too We are Dreamers Echorich recomendation above.....definately up to standard