So Much To Answer For

As you read these words, I'll be heading northwards to the Etihad Stadium in Manchester, to catch the first of two shows on Bruce Springsteen & the E-Street Band's current River Tour. I say current, because for some of us of a certain vintage, this is our second River Tour, the first followed the album's original release in 1981. Ticket prices have gone up a bit in the past 35 years. 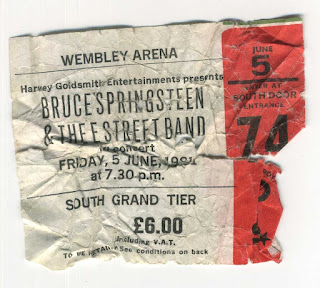 My original twin-tub damaged ticket from 1981.

This is only the second time in my life that I've been to Manchester, the first was for just a few hours one evening in the Winter of 1978, when a band who I was chums with at the time, played at the Russell Club in Hulme, otherwise known as the original Factory Club. I travelled from their home town of Leeds in the back of the hired van, rattling around among the drums, amps, guitars and mic-stands, all the while being slowly poisoned by exhaust fumes - happy days. The weather was bitterly cold, the audience sparse and the support act was Gordon the Moron, he of Jilted John fame. I took photos, but unfortunately mislaid them a long time.

Here's Wire, who I reckon have been on a bit of a roll since 'Red Barked Tree' in 2011. They're not from Manchester, but this appropriately titled tune, from last year's self-titled album, is ace.

Should be a great trip, Swede. His recent U.S. stops were epic. The guy never slows down. Although the tickets are a fortune now, I will bet you exit feeling like you made out like a bandit.

Oh, and so right about Wire. Who would have thought they would still be on top of their game?

Have fun with BS. Looking at the ticket price decades ago I could cry. Nowadays you will pay more than 90 Euro at my place.

I was only discussing Bruce with a couple of mates I play football with last week. One of them was playing a bootleg from a show around 1974 in his car. He reckons it's the best live album of all time! Have a blast mate.

I am happy to see that Karl Blau is on your heavy rotation right now. It is a wonderful muisc for me and I hope I could see him live these days.