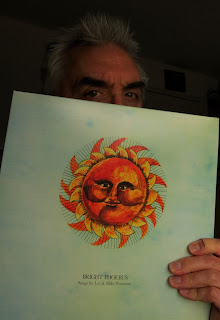 Unless something really extraordinary occurs between now and December, 'Bright Phoebus' by Lal & Mike Waterson will be my reissue of 2017. On its original release in September 1972, the LP was met by a wall of anger and bafflement from a devout folk establishment that believed exclusively in the passing down of traditional songs from generation to generation and held no truck at all with singers who wrote their own material. That Lal & Mike's remarkable set of  self-written songs were frequently, if indirectly, informed by that very tradition was a fact apparently overlooked by all but a very few, less blinkered souls.

During the course of its 40+ years of unavailability, 'Bright Phoebus' has steadily gained a reputation for being the lost masterpiece that it truly is. I've had an iffy quality bootleg CDr of the album for around 25 years and had long since given up any hope of ever holding a bona-fide copy in my hands, but thanks to the good folk at Domino Records, here it is. The full story of how the songs came to be written and how the recordings came to be made is brilliantly told by Pete Paphides in the accompanying booklet (read an excerpt here), plus there is also a deluxe edition of the reissue which includes a further 12 previously unreleased performances from the period.

If you have any interest at all in the English folk and folk-rock scenes of the late 1960's and early 1970's, you really do need to hear this album. Richard Thompson, Martin Carthy, Ashley Hutchings, Tim Hart, Maddy Prior, Dave Mattacks, Bob Davenport and Norma Waterson all lend their considerable respective talents to the recordings, which gives you some idea of the quality threshold we're talking about. And then there's the songs. It's all about those songs. By turns they're dark, desolate, mysterious, beautiful and even, as in the case of the title track, positively jaunty. I honestly can't recommend 'Bright Phoebus' highly enough.

Lal & Mike Waterson - Bright Phoebus
Posted by The Swede at 07:00

So good to see this gem reissued!

Excellent. Will seek it out but, in the meantime, have been acquainting myself with some of the tracks on YouTube.

Way to go, Domino! The fact that this one wasn't out there is ridiculous. Thanks for the heads up, Swede. Had completely missed it.

Ramone666. I dropped Domino a line of thanks the other day and asked them to consider reissuing the pre-Topic Nic Jones albums, also unavailable for a very long time.

Martin H. You won't be disappointed. Thanks for stopping by.

The old and the new. I like it muchly. Where do you stand on Pete Morton?

When I saw the sleeve with face of the sun, I though for a minute it was the 70s album 3:47 E.S.T. by Klaatu. Which apparently it isn't.
You've got me curious now, best reissue of the year is high praise.

Like that. I wasn't expecting it to kick in as it did halfway through. Lovely.