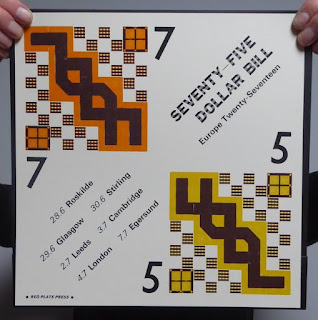 Not long after uploading Tuesday's Halftime Report post, I was reminded of one glaring omission from the list of my most-loved LP's of the first six months of 2017 - Alasdair Roberts! He's a longtime favourite of this parish and his 'Pangs' album was rarely far from my ears in late February and indeed for much of March. I also saw him play a marvellous concert in support of the album around the same time. How could I forget Alasdair? My memory was jogged after stumbling upon an Uncut online review of 2017 thus far, entitled, ahem, Halftime Report. I'd like to say that I got to the title first, but it seems that theirs has been up on the Uncut website for a couple of weeks. Great minds think alike, apparently. The piece (here), written by John Mulvey, contains his 66 (66!) favourite LPs of the year so far. A couple of those titles can be found on my own list and more are somewhere on my radar, but several of Mulvey's selections are completely new to me. There's more research to be done, clearly.

Coincidentally, this isn't the only time I've crossed paths with John Mulvey's writing this week. On Monday evening I undertook a solo jaunt to the back room of a Cambridge pub, where Brooklyn duo 75 Dollar Bill blew the collective socks off of the 100 strong audience. Sue Garner provided excellent support, while the cherry on top for me personally was a short opening set from Cambridge's own primitive guitar maestro, C. Joynes. The 150 mile round trip completely knocked me for six, so the following day I failed dismally in my efforts to pull a few words together in praise of the previous evening's concert, but fortunately the aforementioned Mr Mulvey was also in attendance and had already posted a glowing review of proceedings on the Uncut site - read all about it here.

I've shared music by Alasdair Roberts, 75 Dollar Bill and C.Joynes in the past - and no doubt will again. So where to go for a tune today? Apropos of nothing at all, I'm going back to 1966 and a song that sounded utterly wonderful banging out of the radio at 7 o'clock yesterday morning. Crank it up.

The Velvelettes - These Things Will Keep Me Loving You
Posted by The Swede at 07:00