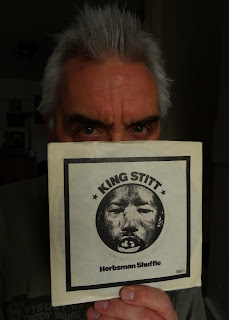 Winston Sparkes acquired the nickname 'King Stitt' in his youth, as a result of a pronounced stutter and later decided to adopt it as his stage name. In addition to the stutter, Stitt was born with a facial malformation, which led him to christen himself 'The Ugly One'. In spite of these setbacks, he became one of the most popular sound system deejays in Jamaica during the 1960s. After 10 years of live work, Stitt was offered the chance to make his own records by producer Clancy Eccles and a run of classic DJ cuts followed. If you know one King Stitt side it's probably the classic 'Fire Corner' released in 1969, but later that same year he teamed up with Lynford Anderson (a.k.a. Andy Capp) to record 'Herbsman Shuffle', a tune I've long been rather partial to.

That's great, never heard of him before. Thanks Swede