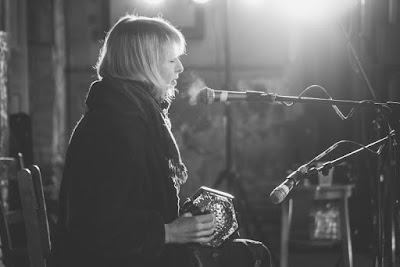 'Secret Love' was composed by Sammy Fain & Paul Webster for the 1953 film 'Calamity Jane', Doris Day's performance becoming a No.1 single and winning the Oscar for Best Original Song the following year. A few other artists also took 'Secret Love' into the charts during the 1950's and 1960's, including Slim Whitman, Kathy Kirby and Billy Stewart, while the song has continued to prove popular with contemporary performers such as George Michael, Sinead O'Connor, Ry Cooder and k.d.lang.

My own favourite version of 'Secret Love' is by Nancy Wallace and was only released in minuscule quantities on a limited edition Rif Mountain CDr compilation in 2010. Her interpretation really is a thing of beauty. I've waxed lyrical about Nancy's music on these pages several times over the years and if you like what you hear, I would heartily encourage checking out her Bandcamp page.

Just saw Doris in Hitchcock's the Man Who Knew Too Much a couple of nights ago. Famous for her Que Sera Sera, of course. Like both versions you offer up here, Swede.

Nice one. I've always liked this song from when I was a little kid, probably Doris Day's original version. My favorite, though, is by . . . Freddy Fender!

Love it. Absolutely love it; as I do her take on Cliff's 'We Don't Talk Anymore'.

Thanks for the Nancy love one and all! Now if she'd only get on with recording a second album...