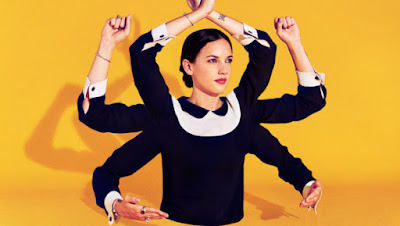 Jain's debut LP, 'Zanaka' was released in November 2015 and by February 2016 had already been certified Gold in her native France. This year she's been taking her record to the world with prestigious appearances on The Late Show with Stephen Colbert, Later with Jools Holland and the BBC's Glastonbury coverage. 'Makeba', the second single from the album, is a sheer pop joy and the song's accompanying video is funny and clever, throwing visual tricks and puns into the mix here, there and everywhere. One particularly interesting twist worth keeping an eye on, is that the opening balloon popping sequence visually picks up from where the video for her previous single ('Come') left off, while the surreal 'painting a zebra' bit at the end is where the clip for her next single ('Dynabeat') begins.

I really liked that Swede, thanks.

I'm into that as well. Thank you.

An earworm indeed but an enjoyable one