In the middle of last week I had to walk into town to pick up my car from the garage. Along the way, I marvelled at the swallows swooping under the bridge and swifts screeching around the narrow streets at little more than head height. In amongst all this small bird action were the ever present gulls - looming from the rooftops, scavenging around waste bins and screaming from the skies. They are ridiculously fearless, intimidatingly huge, but largely harmless. In fact, until last week I would've said that they are totally harmless.

Heading down the narrow lane leading to the garage, I became aware of a large gull swooping back and forth a few feet above my head, all the while making that unsettling squealing noise. There were other gulls around and I assumed the noises were aimed at them. This one gull didn't seem to fly far from my vicinity though. Was I imagining that its angry screams were directed at me? I was pleased to arrive at the garage where I stepped inside and quickly forgot the whole brief episode.

After chatting for a while with the mechanics at the garage, they returned my key and told where they'd left my car. It's a small family run concern with very little space, so cars are routinely left in nearby streets and cul-de-sacs until collection. I'd been in the garage for around ten minutes and left distractedly fiddling with my key-ring. Instantly the gull swooped low over my head, screaming as it went. I was freaked out - it'd been waiting for me. I had a few hundred yards to cover before reaching my car and walked quickly, trying to stay close to an overhanging wall, but the screeching gull was never more than a few feet away from my head, ignoring all other pedestrians. I saw my car up ahead and broke into a slightly panicky jog to reach it, but the Hitchcockian swooping and screeching continued right up until the very moment I went to open the door, when the gull made its closest pass, directly over my right shoulder, unleashing a hefty dropping that missed me by about two inches, splatting down the side of the car and onto the pavement. 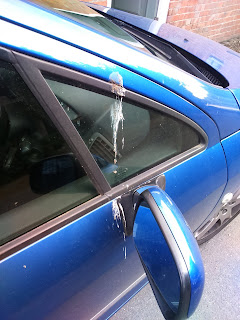 I was genuinely shaken up by the whole episode. Perhaps while walking down the lane, I'd unknowingly passed close to some fledglings and the gull was merely fulfilling its parental duties in protecting its offspring. I don't understand why it followed me for so long though - the car was a quarter of a mile from our first encounter. Plus it appeared to wait for me while I was in the garage - what's all that about? And then there was the parting gift that so narrowly missed me.

Unsurprisingly, Number One Cup's 'Divebomb' became an earworm for the next few days.

Number One Cup - Divebomb
Posted by The Swede at 07:00

Last week it was just ONE bird, Swede .... just wait and see what next week will bring you :-)

Oh shit! Literally.
But what an extraordinary experience. Well, they do say that having a bird shit on you is meant to bring good luck. I certainly hope much better luck comes your way this week. Perhaps the gull is really your guardian angel who latched onto the fact that you (normally) love birds but is a little misguided and inexperienced in its attempts to make its presence felt and needs to find a more subtle approach.
All that hippy-dippy stuff aside... I'm sure I've read about this kind of thing before, it's ringing a bell somewhere in my distant memory. Usually, as you say, to do with proximity of nest/young, but if I can find any other useful or interesting info, I'll be sure to let you know! Meanwhile, I hope it doesn't happen again! Fingers crossed (if you believe that sort of thing...)

Dirk. Thanks mate - I'm staying indoors for the next month!

C. I've subsequently read a little bit about the subject, which why I thought perhaps I'd inadvertently wandered near a nest, but why did the bloody thing follow me so far? I have to take the car back to the garage after the weekend and I'm going to wear different clothing to avoid being recognised - and a hat in case I am!

Hopefully there won't be a next instalment Frank! When I leave the car at the garage on Monday, I'll be making a sharp exit in a different direction to try and avoid a repeat encounter.

Are you sure you weren't carrying a bag of chips?