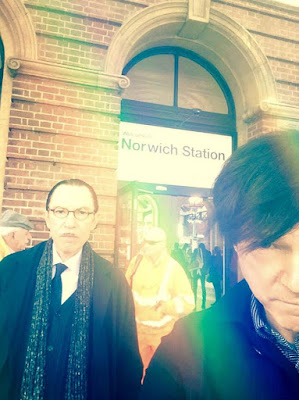 I've only listened to the new album once through so far but can concur with what you say. It's a most enjoyable listen. MrsRobster and I have become belated fans of Sparks and would definitely go to see them if they came anywhere near our neck of the woods. Alas, they're not...

I take it your good lady didn't join you?

Your review is a smile as well. Happy to hear the new album sits so well with the rest of the band's stellar discography. It's on the (lengthy) list.

I'll see them in London a week from now and I can't wait. It has been too many decades and by all accounts this will be one to remember.
The new album is kind of unbelievable in how strong it is and how "Sparksian" their sound remains.

TheRobster. Hopefully, if the album continues to sell well, the band will return for more dates and they'll head out in your direction.

Charity Chic. If you only knew how long it took me to stop laughing after reading your comment!

Brian. It's well worth tracking down - it's very good indeed.

Echorich. I agree, it's almost as if they've rediscovered their core sound. Enjoy the show!

Gosh 43 years on - Who would have thought back then they would still be going. Glad you enjoyed it so much. As for Ron - Now that was/is a look!

Alyson. As Ron has aged, he's undoubtedly grown into his chosen look.

%0% of the people in this hotel room like the hippopotamus song!

I'd go see Sparks if they played within a 5 mile radius of me and the tickets were under £30. If that sounds like too many conditions, it's pretty much the same criteria I apply to all gigs these days, Bruce excepted.

I agree that This Town... is unlike any other pop song ever written, but I always loved it for that.

Glad you finally got to see the band live and even better than it was a joyous experience! I tried the new Sparks LP based on the praise in the press, I just couldn't get into it at all. Similar to your wife's reaction, I found it unbearable to listen to. That said, I do enjoy a few of their older songs, so think I'll stick to those.

Wonderful review....the joy and happiness of the occasion are so obvious from your words.

I loved 'This Town' and 'Amateur Hour' and think the latter, in particular has aged spectacularly well. Never ever imagined they would still be going so strong all these years later.

Oh and the FFS collaboration, and live shows, were immense fun too.