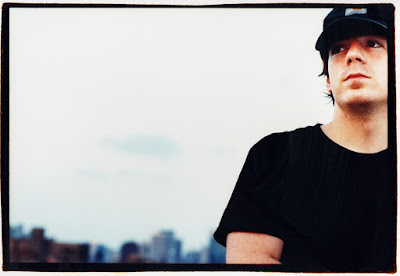 Jason Molina passed away five years ago today, at the tragically early age of 39. Mrs S & I were lucky enough to see him in concert twice, once in 2005 fronting the full Magnolia Electric Co. band in a bustling, chattering Knitting Factory in New York and then again three years later, completely alone on the stage of the Norwich Arts Centre, where his naked, haunting songs held the whole audience in a state of silent reverence, barely able to breath lest we missed a syllable. 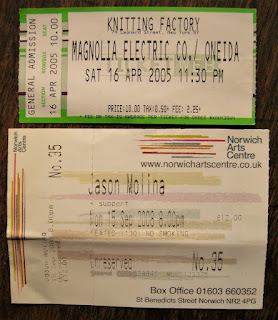 Molina left a substantial catalogue of music, from the intense burn of the Songs: Ohia LP's (amazingly all completed whilst in his 20's) to the more 'conventional' rock configuration of his final band Magnolia Electric Co, not to mention the many collaborations, one-offs and split 7" singles that litter his discography. It is, to quote from one obituary at the time, 'a startling body of work for a musician who crossed the road far too soon'. Here are just a couple of examples.

Songs: Ohia - I've Been Riding With the Ghost
Posted by The Swede at 07:00

For some reason Jason Molina completely passed me by to the extent that the first time I ever heard his name was just a couple of months ago. Kevin Morby and Waxahatchee's cover of Farewell Transmission is wonderful and it led me to seek out the original.

Seems like the perfect artist for an ICA, Swede...

Those guys have good taste. Farewell Transmission is a terrific song.

Riding with the Ghost is particularly good.

'Riding With the Ghost' is atypical of Songs: Ohia and points the way towards Jason's Magnolia Electric Co. years, his Neil Young & Crazy Horse period.

Both very good, such talent. So sad that he died so young.