Why Didn't You Tell Me? 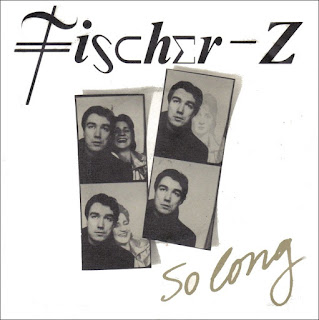 Some months ago a friend, travelling by train in the general direction of the small town where my little record shop was located between 1986 and 2000, fell into conversation with an anonymous fellow passenger, who, it transpired during the course of the journey, was a former customer of mine. The conversation went something like this.

At this point my friend had heard enough, whipped out his phone and showed my former customer a photo of yer humble author in as fine-a fettle as I can manage these days. My former customer was, as you might imagine, gobsmacked to say the least. Apparently this unfortunate story has spread itself around certain sections of my old hometown in the last few years. Sadly, I suspect that my former customer had picked up on a combination of whisper and gossip, sparked by a tragic seed of truth.

Prior to becoming Swede's Records, my shop was Gordon's Records. Gordon ran the place for 4 years after buying it from Derek, who had originally established the business in 1981, quitting after a brief 12 month period. Before setting up the shop, Derek worked as a record company representative for many years, a career he returned to shortly after throwing in the towel and selling the business to Gordon. Derek often dropped into his old shop after I took it over in 1986, checking that I was doing ok and leaving me the odd bit of stock, as at that point I didn't have full record company accounts.

I'd originally met Derek way back in 1980, during my very earliest days of working behind the counter in a branch of a small independent record shop chain. Most of the reps quite understandably ignored me, reserving all of their conversation, attention and persuasive powers for the manager or new release buyer, but Derek was the kind of guy who had time for everybody. During one of our many conversations, I happened to mention how much I liked Fischer-Z's 'So Long', a single available on the record label that he worked for. Several minutes later, when he returned from his car with an armful of stock for the shop, Derek discreetly slipped me a copy of the 45 in question. 'There you go' he said. A few weeks later, Derek was in the shop again, to push the band's then current 'Going Deaf For a Living' album and, remembering our previous conversation, handed me a copy of the LP and a Fischer-Z promotional t-shirt. I was overwhelmed to be quite honest. He had no cause or reason to to give me anything at all, as I was the new kid in town and had next to no influence over what we stocked, but, in time, I came to realise that this small gesture of kindness was typical of the man.

One evening in 1986 Derek phoned me at home to ask if I wanted to meet up for a pint, but I wasn't able to, so suggested that we rearrange for later in the week. He appeared to be fine with that and told me not to worry, but apparently later left the house, telling his wife that he and I were going to the pub for the evening anyway. The following morning Derek's body was discovered in his car at the end of a remote country lane. The police and members of Derek's family were initially convinced that I must've been the last person to see him alive, until I explained that we hadn't actually met up at all.

In 1986 I was a ridiculously naive 26 year old, having the time of my life, living the dream of running in my own tiny record shop and completely oblivious to Derek's dreadful depression, as, it transpires, were virtually all his friends and family. He was a lovely bear of a man, liked by absolutely everyone and seemed very grown up from my perspective, but was actually only 37 - no age at all. I can only assume that the relatively recent rumour of my own demise somehow stemmed from a series of confused, half-forgotten memories of Derek's tragic fate all those years ago.

(Many thanks to Swiss Adam for reminding us of these vitally important organisations in his recent Keith Flint tribute: Campaign Against Living Miserably & The Samaritans.)
Posted by The Swede at 07:00

What a very sad Story Swede. Seems like another great person passed away too soon.

In reality I didn't know Derek very well at all compared to his family and many friends, but the memory of his outwardly positive spirit and good nature has remained with me throughout the years. I don't know what I could've done had I known about his internal struggles, but I so wish he'd shared them with someone.

Such a touching post, initially making me smile at the rumour of your demise, and then the terrible sadness of Derek's story and its reality. Weirdly enough Mr SDS and I were talking about something similar last week and I happened to mention my memory of the jolly, smiley rep I knew too from my record shop days and then the very sad and shocking news of his suicide. Particularly shocking/unexpected because he was such a gentle and cheery character. Depression can be so hard to detect and I can only hope that as our awareness of it increases, a few more people are more likely to open up and seek help.

I just realised that the first part of my comment doesn't sound right at all - I meant that I was smiling at the *ludicrousness* of that rumour about you!

Such a sad tale. As was reading it I was reminded of the late Keith Flint stories that came out after his death. It's always the nicest kindest people, yet they slip through the net.

Well done for sharing that, it can't have been easy but it made for some thought-provoking reading.

Very sad story. Having lost an old girlfriend to suicide last year (though it was many years since I'd last seen her), I understand how it can often be the people we least expect to lose that way who do, nevertheless, choose that option.

This is quite a post, Swede. My thoughts have already been reflected by others above, but I was really moved. I like this song very much.