A Busy Birthday Week - Part One

On Monday evening I stood towards the back of a small Norwich venue as Pigs Pigs Pigs Pigs Pigs Pigs Pigs hurled their splendidly unholy racket in my general direction. And that was just for starters. Five nights later, downstairs in the larger room, Sleaford Mods made their third visit to the Fine City. While 'Moptop', Tweet Tweet Tweet' 'Giddy on the Ciggies' and 'No-one's Bothered' have all disappeared from the band's current setlist, newer songs like 'TCR', 'Stick in a Five and Go', 'Kebab Spider' and 'Discourse' have quickly become live favourites. Another grand night out. 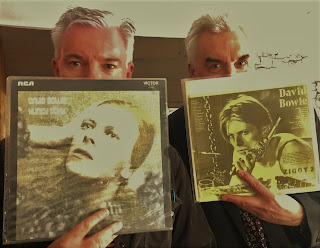 The following morning I was up with the larks and on the road early to reach a 2pm appointment in Nottingham. After a 150 mile drive, I stepped through the doors of the Running Horse public house to be greeted by a chap adjusting the levels behind his mixing desk. The event in question was the inaugural Sunday Vinyl Session and the chap twiddling the knobs was our mutual friend John Medd. Crucially, he didn't know I was coming and his casual nodded greeting told me that he didn't recognise me from Adam, so I did the only thing I could think of and held up the LP I was carrying so that it covered the bottom half of my face in a Swedey McSwedeface stylee. If anyone in the Nottingham area heard a clunking sound around that time, it was probably the sound of John's jaw hitting the floor. Along with his co-conspirator Bright Ambassador (he of Modern Gutnish), John introduced, played, then led an informal discussion on, David Bowie's 'Hunky Dory' LP. The three hour session was an absolute joy and fairly flew by. Exciting plans are well underway for future Sunday Vinyl Sessions, which will take place at the same venue on the second Sunday of every month. Watch John's blog / twitter account for further details - there's even a Facebook group you can join. Is there anything better than sitting in a good pub for a few hours with a group of like minded, friendly people, while listening to a few records? I can't think of anything.

My drive to Nottingham was punctuated by a couple of long roadwork related tailbacks, which meant that by the time I eventually arrived at the Running Horse, I hadn't had a chance to grab a bite to eat as planned. Consequently, by the time the Sunday Vinyl Session wound down at 5pm, I'd consumed a few beers on a stomach that had seen no food since a bowl of cereal at 8 o'clock that morning and was in imminent danger of sliding off my chair. Step forward John and Jenny, who marched their unexpected guest off to The Angel for a big plate of delicious grub and the first of many more beers that we enjoyed throughout the evening.

Happy birthday (belatedly), Swede. Glad you're making a good week of it.

Warms the cockles to see you fellas together like that.

It was indeed A Grand Day Out.

What a fab week - and imagine thirty-odd years ago if someone had told you you'd be spending the week of your 59th birthday going to gigs (and what gigs!) and meeting someone miles away you'd only communicated with previously via a computer... Mind-boggling!

belated birthday wishes Swede and here's a late wee present, the other side of the Massive Attack vs Burial record https://app.box.com/s/u8m6ybqhol6kvjvy6r3rqwgxvcsk5w7l

Thanks all! Concluding part tomorrow.
Cheers Drew, much appreciated.

Belated Happy Birthday TS - The countdown to mine starts now and I doubt if either of us are particulary looking forward to next year's, but hey ho, you certainly sound as if you are making the most life at the moment. As C said, who would have predicted years ago, that you'd be finally introducing yourself to a good friend who would only recognise you with your Swedey McSwedeface! Sounds as if you had a great time and I love the whole idea of the Vinyl Session.