After deciding that I was going to travel to Nottingham and join in the fun at John and Bright Ambassador's inaugural Sunday Vinyl Session, I had a poke about the interweb to find out what might be going on in town during the evening, by way of entertainment. Amazingly there was a gig of interest at the Running Horse, in the very same room where I'd be spending the afternoon discussing all things Bowie. Johnny Dowd was in town. So after dinner and a brief pit-stop in another cool little bar, John, Jenny and I headed back to the pub where we'd met just a few hours earlier. 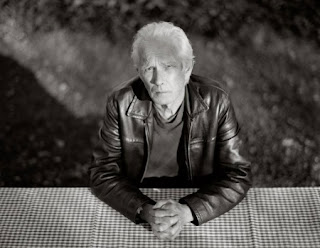 I knew only a little about Johnny Dowd before the show, but what I did know definitely ticked my boxes. Prolific, maverick, alt-country oddball doesn't begin to adequately describe the man and the music he makes. He's a dark poet, as funny as hell and as serious as your life. After the show we chatted to a couple of fans who are following Johnny's tour around parts of the UK. 'Completely different every night' said one. 'A totally different set from yesterday's' said another. I'm linking a short documentary on Johnny's 2015 UK tour at the bottom of this post, which is worth 18 minutes of anyone's time and will probably tell you more about him that I ever could. Johnny Dowd is 71 and already visibly more frail than when 'Disco Sausage' was filmed. If he tips up in your town anytime soon, I'd highly recommend that you give him a go. I really hope that I can catch up with him again one day. It was late, I'd had a long day, done a lot of driving and (for me) a lot of drinking. I was bushed. Hugs were exchanged between myself and my wonderful hosts and I headed off down the hill to my hotel. I suspect that I was asleep before John and Jenny had even caught their bus home.

On Monday morning I wandered into the centre of Nottingham in search of sustenance and enjoyed the most delicious breakfast/brunch in the Cartwheel Cafe - Roasted cauliflower, chickpeas, sun-blushed tomatoes, potato hash, roasted beetroot houmous, red amaranth and spring onions drizzled with garden pesto. It really was amazing, as was the Rwandan coffee that accompanied it. After ambling around for another half an hour, I necked an espresso at Outpost Coffee for the road and headed off to Cambridge. 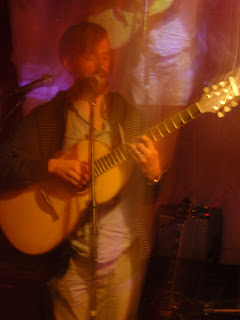 David Thomas Broughton is part singer-songwriter, part avant-garde performance artist - the clipped Northern diction of his sonorous baritone (think a 21st Century Jake Thackray), guitar and various electronic gizmos are looped, dissected and reassembled to inject sometimes spontaneous elements to each individual performance. He's a baffling prospect to many, but once you fall under his spell, it's hard to look away. He had the entire room in his hands on Monday evening in Cambridge. On Tuesday morning I bumped into him in the hotel lift as we were both on our way to check out. Not wishing to come across as a weird stalker type, I merely thanked him for a great show the previous evening and told him I'd catch up with him later in the day in Norwich.

I was in Cambridge and, as it was my birthday, I figured that I deserved a treat or two, so I made tracks for the frankly magnificent Relevant Records. I'm so glad that this place isn't my local record shop. I could have easily dropped a months wages without even starting to dig deep into the bins. As it was I behaved myself, coming away with Nursery Rhymes by Bill Wells & Friends (a physical copy of which I've been after since posting about it here), second hand copies of John Cale's 'Paris 1919' and 'Future Songs' by The Doozer, plus the Joe Strummer RSD 12" of 'Forbidden City'. Then there was more food, more coffee and a drive onto Norwich, where David Thomas Broughton's performance was in a public bar and free of charge. Unfortunately this meant that a contingent of the audience were not only not there to see him - they simply didn't get what he was doing. This resulted in much peripheral chatter from sections of the crowd, which was a shame as they were missing a terrifically engaging show. After the gig, I wearily drove the last 20 miles home through the night, the first day of my 60th year completed.

Broughton didn't play 'Silent Arrow' at either of the shows I caught on this tour, but it's become something of a personal favourite of mine and illustrates what it is he actually does pretty well.

I'll give Disco Sausage a coat of looking at! Here's a clip of John Marriott who supported Johnny Dowd last Sunday.
See you later in the year?

Fantastic. My mouth is also watering at your description of breakfast/brunch... sounds delicious.

How did I manage to overlook John Marriott? He was tremendous. Thanks for that link John. I'm going to click about to see if there's anything else available. I shall return, of that you can be certain.
That brunch really was something else C.

The first day of your 60th year sounds as if it was a blast! As you know I'm doing a course at college at the moment and there is a poetry module. I find it really hard to veer away from song lyrics and the work of rappers/beat poets. Sounds as if this guy's output is well worth an investigation.

Meeting friends, hitting record stores, seeing shows... sounds like you had quite an adventure to celebrate your birthday. Green with envy.

Alyson, Brian - I did indeed have an absolute blast.