So the very first band I ever saw on a concert stage were...Bees Make Honey. The pub-rock outfit were T.Rex's support act on the evening of December 22nd 1972 and were greeted with a mixture of apathy and abuse - a tough crowd for sure. A few records (including 'All the Young Dudes' with the entire audience shouting the '... I got T.Rex' line) followed, before Radio 1's own Emperor Rosko was wheeled out to introduce Marc & Co in much the same fashion as he had at the Wembley shows earlier in the year, forever immortalised in the film 'Born to Boogie.' 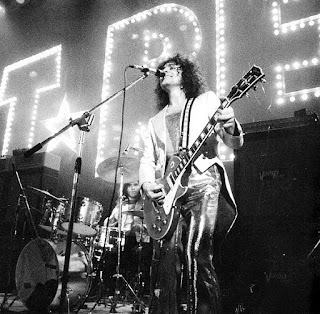 The noise level was astonishing. The band alone was louder than anything I'd heard up to that point in my young life, but, with addition of the relentless wall of screaming, it soon became impossible to communicate with my pals John and George. My initial feeling was one of mild panic. It was hot too - a couple of thousand over excited kids were leaping around and working up a sweat, while many dutiful parents sat alongside their offspring, with fingers in ears. Condensation ran down the walls. 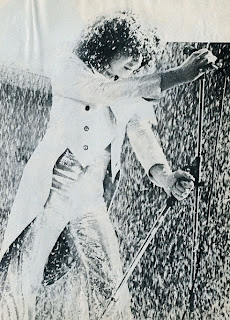 And so to Marc Bolan, Mickey Finn, Steve Currie and Bill Legend. Forty years on, in the cool light of 2012 and with hundreds of concerts under my belt, I can safely say that T.Rex in 1972 weren't a great live band. Legend and Currie certainly earned their £25-a-week, maintaining some form of structure to the music, indeed for long periods of the evening they were the band. Bolan did as he pleased, everyone was there to see him after all. Sometimes, as in the opener 'Chariot Choogle', his playing was sharp and tight, while at other times, notably during a 15 minute 'Hot Love' and 20+ minute 'Get It On', he became hopelessly self-indulgent, soloing endlessly and running a tambourine up and down the frets, creating cacophonous howls of protest from his guitar. Quite often he'd do nothing, he didn't need to. Just being in the same postcode as him was more than enough for most of us. Mickey Finn? He inaudibly hit a bongo occasionally, but spent much of the show throwing mini-tambourines out into the audience - hundreds of them, each one fought over to the extent that I doubt that any whole tambourines made it out of the hall in one piece at the end of the night, splinters and scraps must have been all that remained. 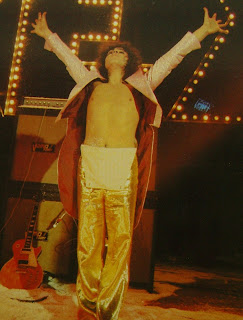 Having said all that, if I remove my 21st century hat (which could almost be a line from a T.Rex song), the show that night could not have been any more perfect for this 12 year-old boy and his chums. It was colourful, loud and exciting, featured an seasonal fake-snowstorm that engulfed the stage and part of the audience and starred a man at the peak of his popularity who, from our perspective, had seemingly beamed in from another galaxy. The evening was a musical rite of passage for us. We entered the Edmonton Sundown as boys and left.....as very sweaty boys, with our ears ringing! It was an overwhelming experience and, for me at least, a life-changing one.

(Postscript. When it was over, Dad was waiting for us outside in the appointed spot. We got into the car soggy, steaming and hoarse and drove home in exhausted silence. As we dropped them off at their respective houses, John and George wished Dad a Happy Christmas and thanked him for buying the tickets. I did too - and I hope I also remembered to thank him for trusting us, by not getting a fourth ticket for himself, which would have allowed him to chaperone us inside and throughout the whole show - where he would have sat, no doubt, with his fingers in his ears.)
Posted by The Swede at 17:38

That was great I was almost there with you. There can't be many better first gig stories to match that. Get it on!

Great stuff. Interesting you didn't think T.Rex were a great live band. I remember watching the gig filmed for Born To Boogie (DVD extra) and being knocked out by how much better they were than I ever imagined. Suppose all gigs are different.

Thanks OPC, when I started writing there was no intention of spreading it over three posts, but when the memories started flowing I ended up having to cut whole chunks out, otherwise the story would have stretched over a week!

Cheers Monkey, It's not easy being critical of your heroes, but any negative comments were strictly made from a 2012 perspective - in 1972 T.Rex were my world and really did change my life. That being said, I would dearly loved to have seen Bolan again on the 'Dandy in the Underworld' tour, with his excesses reigned in and a sharp band in tow, but, as it turned out, December 1972 was my one and only time.