The local sparrows have always pulled and pecked a bit, but this year they've really been munching away at Mrs S's beloved garden. Leaves from the stems and petals from the flowers, nothing, it seems, is safe from their roaming beaks. They leave a trail of devastation behind them, causing Mrs S a whole bunch of grief. Perhaps their extra-curricular quaffing is a comment on the quality of the actual bird food I put out for them, though that always disappears fairly sharpish too. To Mrs S's credit the garden still looks fantastic, regardless. 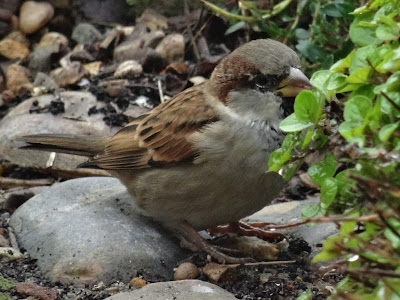 All of this is a long-winded way of introducing 'Garden', the latest track to be lifted from C Duncan's imminent debut LP, 'Architect', following on from last year's equally classy single, 'For', and 'Say' from earlier in 2015. C Duncan hails from Glasgow and I feel sure that one of my Scottish based blogging chums must have flagged him at some point over the past few months, though as I've only lately come to fully realise just how special his music is, I'm sure they won't mind me spinning a couple of his tunes again.

Swede, that second song is sublime, I'll be hoping I can purchase some downloads somewhere.

I’ve been meaning to include some of his music on my blog for a while now and have only ever given him a quick mention. Must rectify soon as he really is a talented guy.

Testing my spiffing new speakers and these tracks sounded lovely. Thanks for the 'heads up'.

Very atmospheric and evocative. And I do so love a sparrow... great pic.

Another one to add to the ever growing list. Excellent stuff

Glad you all enjoyed the tunes. Really strong stuff I think.

CD new to me but definately worth a follow up.