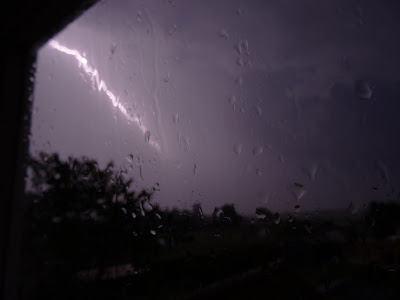 In 15 years of living on the coast in the 1980's and 1990's, I watched many a big storm roll in from the sea, crash, bang and flash overhead for a bit, before moving on inland. I've never experienced a storm like the one we encountered in the early hours of Saturday morning though. It was the Mother of all storms. In fact it was the Mother, Father, Sister, Brother and complete extended family of all storms. I grabbed my camera and tried to document the cacophony kicking off in the skies around us, but this was as good as it got.

Pretty dramatic shot, sir. We had a pretty big storm around here but looks like you might have beaten us. This weather has been a bit weird of late.

We were waiting for the ferry at Caen at about 7 in the morning on Saturday and I had Leo on my shoulders when this fork of lightning flashed right in front of us and with the nearly immediate incredibly loud crack of thunder. Leo jumped from my shoulders and was back in the car before the rumble was over which had all around in fits of laughter. The storm carried on for the next hour or so but not a lot of rain. We had a cracking storm two nights previously from around 2 am til well after 4.