There was a time when I would have bread with every meal. Three pieces of toast for breakfast, a sandwich or two for lunch and a couple of slices of bread and butter to mop up my plate after dinner. Those days are long gone though, along with the almost permanent bloated feeling and a couple of Stone in weight. These days, bread is more of an occasional treat, as it was a couple of days ago when Mrs S baked a scrumptious heavily seeded loaf. I had two slices, lightly toasted, topped with a big dollop of thick cut marmalade and washed down with freshly brewed black coffee (Guatemala El Libano Caturra, since you ask). Some things are just made to go together - toast, marmalade and black coffee are three of them. 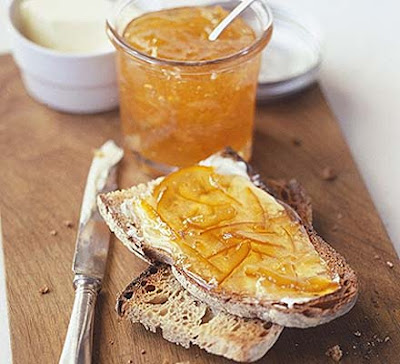 This isn't actually Mrs S's loaf, but the resemblance is close enough to get my mouth watering.

This is The Geraldine Fibbers, fronted by the redoubtable Carla Bozulich. They were only around for a few years in the mid-1990's, but still managed to put out 2 excellent studio LP's, a live album plus a selection of singles, EP's and mini-albums.

If you know one song by The Geraldine Fibbers, it's probably 'Dragon Lady. The video is a little dated, but the tune still kicks it.

TheMadster (my eldest daughter) is a bread monster. Even after I've taken the time, effort and care to cook a good, homecooked meal, she has to grab a couple slices of bread and fill them with the contents of her plate! Being a competitive middle-distance runner, she lives off carbs, but it's incredibly frustrating when you see everything consumed as a sandwich, and then find there's nowt left to make your lunch with!

Sent you a couple of emails about this. Would you please remove the outdated link to 'Spreadin' That Rhythm Around'? Thanks.

For me, it's their wonderful version of 'Fancy'. Great band. I think I need to cut down on the bread in-take. Mrs. S's looks lovely.

TheRobster. TheMadster sounds like me 20 years ago, minus the middle distance running bit, natch.

Marie. Nice to hear from you. I left the link up there to make sure I didn't miss anymore of your pop-ups. I rarely check that email account, so I haven't got the message. Are you totally finished with blogging now? I'll take the link down. Stay in touch.

Singing Bear. Sadly that's not her loaf, but next time she makes one I'll be sure to take a photo before I tuck in!

Please check your email because I sent you an invite so that you can catch up on anything missed recently.

Never heard anything by them before but that was pretty good. I have one of bread recently and I don't know why...a bit of nutty homemade might just get me back. Thick Marmalade sound good too.....I'm off to make my porridgete, a ittle honey!

They do a good version of Bobbie Gentry's Fancy

Not too sure I could live without my daily bread intake. I would probably been considerably thinner tho'

Yummy! But I'm a bit late and suspect there's none left now...
(Must also check out the version of Fancy that CC mentions as I love Bobbie Gentry and it's such a great song.)

Old Pa. My usual breakfast is Granola with Fruit in Summer and Porridge in Winter, though our Summer has been so dismal that it's sometimes hard to decide what to have.

Charity Chic. You're absolutely right. They take a good run at 'Jolene' too.

Drew. It was hard to ween myself off it, but I seem to enjoy it all the more when I do have it nowadays.

C. Long gone! Do check out 'Fancy', it's an excellent version.

I too recently discovered the Geraldine Fibbers. Though I should say, re-discovered as I'd bought a CD of theirs several years ago but have only just got around to playing it as part of my A-Z CD trawl (Yes, I've still got a long way to go!). As you say, Dragon Lady is a great track and seeing it on YouTube makes me regret never having seen them live. T'was ever so. Also re Marmalade, the Scottish band of that name had a few poppy hits in the 70s but I'm sure I've read that they have some lesser known decent tracks that might be described as 'lost classics'. I must investigate.