A channel dropped out while I was playing a record about a month ago, leaving just a crunching noise coming from one of the speakers. I checked the leads, fiddled with settings and cursed a bit. Everything else feeding off the amp appeared to be working fine, so I reasoned that it must be a connection in the turntable. After a little research, I discovered a place about 20 miles away that carries out general electrical repairs, so I took my turntable in for a service. Back at home, literally an hour later, my old laptop died. (I have a new laptop, but I still haven't got around to transferring all my photos and music across) I phoned up the same servicing place to find that yes, they were confident that they could get the laptop up and running again, at least for long enough to allow me to retrieve everything from the hard drive. 'Bring it in' they said. 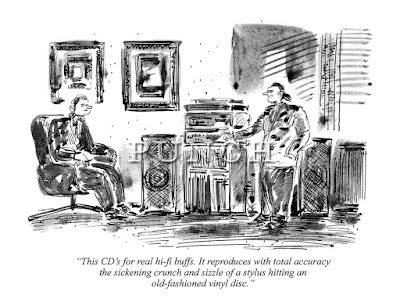 A week later I made the 40 mile round trip to pick up the turntable and drop off the old laptop. When I got home I plumbed the turntable back into the system and sat back to enjoy some tunes. After a minute a channel dropped out, leaving just a crunching noise coming from one of the speakers. The fault was somewhere in the amp all along.

On Monday I got the call to say that my laptop was ready for collection. I mentioned the amp to the guy on the phone. 'Bring it in', he said. So, yesterday morning, I disconnected everything from my trusty vintage amp, placed it carefully on the back seat of the car and set off on another 40 mile round trip to drop it off and pick up the laptop. Two miles down the road the engine started stuttering and lights began to flash on the dashboard. The car shuddered to an undignified halt. I raised the bonnet and stood by the side of the road looking at the engine in despair, as traffic whizzed by inches away.

I only want to listen to a record.

Oh no! How frustrating, and I wish you luck.
But at least you are proof of the adage that 'bad luck always comes in threes' so that's it now, what a relief - it's time to celebrate ;-)

Thanks C, the car is booked into the garage for next Wednesday, so I guess I'll find out if that's true!

I feel your pain. There's always something, isn't there? I'm truly hoping all your problems are fixed soon.

Thanks Singing Bear. I'm making a mountain out of a few molehills really. It's just a bit frustrating!

You're going to get a lot of empathy with this one. When it rains, my friend.