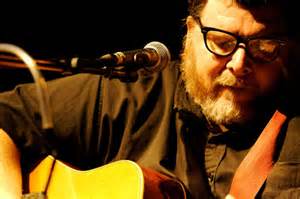 I was saddened read that Robert Fisher, founder of The Willard Grant Conspiracy, passed away over the weekend, following a year long battle with cancer. The band debuted in 1996 with '3am Sunday @ Fortune Otto's' and released a further nine studio albums up to and including 2013's 'Ghost Republic'. In spite of his increasing illness, Fisher apparently spent much of 2016 holding down a day job while simultaneously recording tracks for a new, as yet unreleased LP.

Mrs S & I saw Willard Grant Conspiracy back in 2004 and were greeted by Robert himself, sitting behind a desk just inside the door of the venue, selling his own merch. 'The Work Song' was one of the many highlights of the show that evening.

Willard Grant Conspiracy - The Work Song
Posted by The Swede at 07:00

So sad to hear. I bought there first album and many others after. I saw them live with the Handsome Family and got my pic taken inbetween him and Rennie Sparks. They were outside in the foyer.Great choice of song too.

Nice in memoriam you wrote. I don’t have a history of listening to Willard Grant Conspiracy, but I like The Work Song, which feels universal in its lyrics. Hopefully his fans get to hear the new songs he made before he died.

CC. I had a feeling you might've. Unfortunately he only passed this way once.

Old Pa. Great story. I know you don't get to as many gigs as you'd like, so that's good to hear. Perhaps we'll see the photo someday?

Chris. Robert's songs can be plaintive at the best of times. I suspect that hearing his final work will be unbearably poignant.

Can't claim any familiarity with WGC other than the name but I like this. . . .

I feel bad saying this, but I missed this artist entirely. Seems I have some work to do. To those who admired him, I'm, sorry for your loss.

I added your blog to http://yourrecordplayer.blogspot.ie/