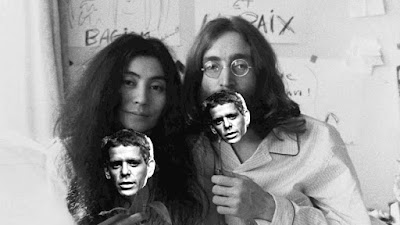 Come Together, A Night for John Lennon's Words and Music, took place at Radio City Hall in New York on October 2nd 2001. The concert was initially intended as a straight forward celebration of Lennon's life and songs, seven days before what would have been his 61st birthday, though coming just three weeks after 9/11 the event was re-dedicated to the city of New York and its people, raising funds for the Robin Hood Foundation along the way. The line-up was, to put it politely, a mixed bag. Kevin Spacey singing 'Mind Games' anyone? The highlight of the evening, by a country mile in all honesty, was Lou Reed's searing interpretation of 'Jealous Guy'.

Having not heard any of the other performances from that night, I'll take your word for it that Lou was the best. This is mighty fine, as you'd expect from a man who blew everyone else away at the Dylan tribute in '91. Kevin Spacey? Really? Why are these things allowed to happen?

I've flicked through the majority of the show and to be fair there are a couple of other worthwhile performances, but Craig David's 'Come Together', Nelly Furtado & Dave Stewart's 'Instant Karma' and Marc Anthony's 'Lucy in the Sky With Diamonds' are most certainly not among them.