The Pictures On My Wall #2

An occasional series looking at the memorabilia and mementos I keep close at hand.

I had every intention of marking the 35th Anniversary of the release of the first Clash album with an eloquent post concerning the band's importance and continuing influence on my life, but I just keep finding myself shaking my head thinking....bloody hell - 35 years! Where did that go? 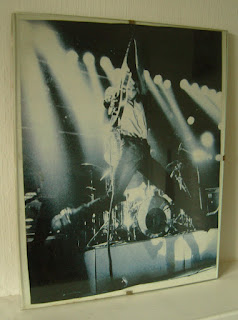 These two pictures have been companions for a good number of those years. Mick Jones in full flight on the 16 Tons Tour crudely cut from a magazine and slapped behind glass alongside a favourite band shot from the Sandinista period - this one an actual photograph, browning and faded from too many hours in the sun, but what an image...what a band. 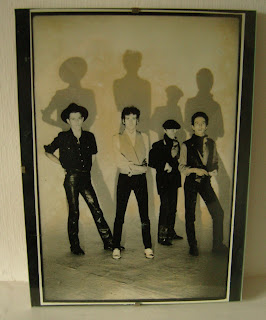 (Here's a thrilling blast through Remote Control - hold on tight, it's a bumpy ride.)

Labels: Clash, Pictures On My Wall

I remember reading a fascination review of that French punk festival (the fist of its kind?) in the NME. It sounded really great. I think it was in a bull ring or something. Very exciting times. 35 years since the first album? Bloody hell!!! Still sounds fantastic.

The Clash have always had a special place in my heart, their first album was mine too (http://sundriedsparrows.blogspot.co.uk/2011/04/first-album-you-ever-bought.html)
They were always so photogenic too - that Sandanista era photo you have is great. They had such style, without actually being pretty boys, if you see what I mean. Although I did have some pin-up pics of Paul Simonon from teenage girls' magazines at the time, quite weird to think of that now! Anyway, love the photos, love the clip - and still love the first album 35 years on... (aargh!)

Every time I sit down to write a post I have to curb the urge to bang on about the Clash (or Bob Dylan!) for half an hour! Their influence on me is incalculable. The London Calling/Sandinista period is my personal favourite, but for sheer adrenaline charge, the first album can't be beat!

I must've missed that post C, pretty darned cool! Here's my unofficial first LP (blagged from my parents) http://unthoughtofthoughsomehow.blogspot.co.uk/2008/12/where-it-all-began.html I'll the cover the anniversary of my actual first solo purchase in July (if I remember!)