From the ages of 1 (in 1961) to 15 my parents took a birthday photo of me in front of our radiogram, a family tradition only broken by my teenage attitude and refusal to play along by the time it came to 1976. Why the radiogram? I've no idea, other than it stayed the same size as I grew. Also, Dad sold 'Hi-Fi' equipment for most of his working life - I guess the radiogram was cutting edge technology in 1961, although it had certainly seen better days by the mid-70s. 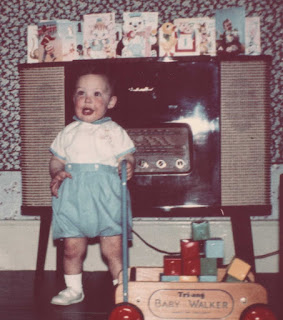 (1961)
I have many boxes of photos, slides & negatives to plough through, but one day I'd like to get all fifteen birthday shots together in one place for the first time. I've found eight so far. Attached is a sampling from when I still had a modicum of cuteness! 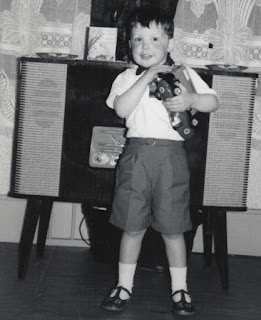 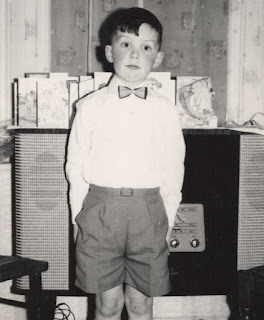 Blimey! The family radiogram! I'm sure we had the same one at one time (we went through a few that dad picked up in various junk shops). I LOVE radiograms as they provided me with my initial musical education. Oh the memories come flooding back. I'll be 52 as well this year, so no wonder we share some many common musical experiences. Groove on!

Oh SO charming! What a brilliant idea your parents had, to do such a thing - a really neat record of your formative years! Totally understand about the teenage thing though - I'd have been exactly the same (either complete refusal or a studied scowl...) Anyway I do hope you will post as many more as you can. And - HAPPY BIRTHDAY! Hope you're having a good one.

Yes SB, I played my first records on the piece of kit you see in the snapshots, but not for long though! Even at such a tender age I knew that no stylus arm should be THAT heavy! I was given my very own mono Fidelity record player in 1971 - I can't remember if it was for Christmas or Birthday, but it was certainly independence day for me!

C, if & when I find more of the earlier photos I might consider posting them. I've already located a couple from my teenage years....and there ain't no way they're being made public!!!

Thanks both for the birthday greetings.

We restore vintage radios and I would like to start an archive of photographs of radios as they were originally used, would you consider letting me use yours and telling your story on my blog?

Hi Maddie. Thanks for stopping by. Please feel free to use them if they are of interest to you. Let me know if & when you put a piece on your blog and I'll be happy to post a link to it.