The Speed of Sound Turns Decades Into Hours

The record shop I frequented most in the summer of 1977 (and the one I'd eventually work for) kept a 'punk box' of singles behind the counter, which you had to a) know about and b) ask for. Luckily, I was in the know and one morning after hearing it on Peel's radio show the night before, I pulled The Only Ones debut single 'Lovers of Today' from the box and handed over my cash. Much as I was briefly swept along by the nihilistic clatter of some of the second division punk of the day, I primarily like pop songs, however dark, and pop songs don't come much darker than Peter Perrett's. 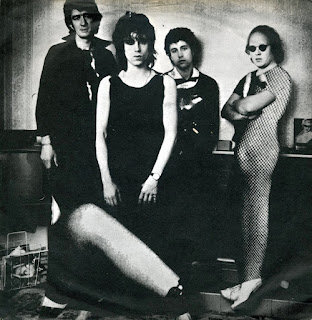 For the next four years I followed the band from afar, cherishing every recorded moment, but never getting to see them live - and then they were gone.

Thirteen years later Perrett re-appeared with a new band and new songs which were as painful and glorious as ever and, just before this brief chapter also came to a premature conclusion, I finally managed to see him live, at the Mean Fiddler in London. He looked frighteningly frail, but led his band straight into Another Girl, Another Planet, an opening gambit so powerful and unexpected that it took the audience a full five seconds to react at the songs' conclusion. It was one of those moments. After a further ten years of silence, The Only Ones reformed and continue, in some degree, to this day.

From the small glimpses he has allowed us through his songs and the long silences in-between, Peter Perrett's life has clearly not been an easy one. Today he turns 60. Happy birthday and good health Peter.
(Here's a great TV performance of the title track from Peter Perrett's last album of new material in 1996.)

Happy birthday, Mr. Perrett! Saw The Only Ones supporting Television in 1978 and have been fan ever since. 'Lovers of Today' was one of my own early punk acquisitions, too. Brilliant.

Legendary show - nice one! Our tastes (& possibly our ages!) seem to overlap somewhat - I wonder if we've ever been at the same gig?