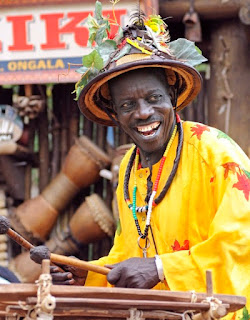 During a long career, Senegalese drummer Mor Thiam has played for Freddie Hubbard, Don Pullen and The World Saxophone Quartet amongst others, as well as occasionally recording under his own name. Thiam's first LP as a leader, 'Dini Safarrar (Drums Of Fire)', released in 1973, was a self-finaced effort with all proceeds donated to famine relief in Africa. The record features the talents of Oliver Lake on sax and Lester Bowie of The Art Ensemble of Chicago on trumpet. During its many years of unavailability, the reputation of 'Dini Safarrar' steadily grew amongst enthusiasts of jazz, funk, hip hop & African music, with an original copy of the LP changing hands for over £1750 in 2008. Thankfully, Jazzman records reissued the album on vinyl and CD in late in 2016, though stocks of the LP are apparently already exhausted.

A word of warning, 'Ayo Ayo Nene', which translates as 'Blessing For The New Born Baby', is total earworm material.