This Could Be the Last Time 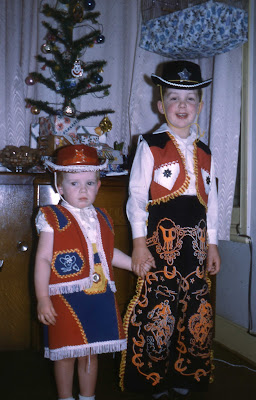 Walthamstow was like the Wild West in those days. My cousin and I, Christmas 1965

In the second half of the 1980's, my cousin's company temporarily relocated her to their New York office, where, in the fullness of time she met and married a very fine American man. The temporary relocation became permanent and every year thereafter, she and her husband travelled back to the UK for a couple of weeks each Summer to stay with her mother (one of the two elderly aunts, who are often mentioned on these pages). 20 years ago they began to bring their first child, a boy, with them. 17 years ago he was joined by a sister and 12 years ago by a second sister. All five of them crossed the Atlantic annually, bringing a few days of joy into all of our lives - until 2015. By the summer of 2016 I feared we might have seen the last of them as a full family unit. The boy (or, more accurately, young man) was off travelling with friends prior to starting college in Rhode Island and the oldest girl had signed up for a Summer-long photography course in New York, while her dad stayed home to look after her. My cousin and her youngest daughter came over to England alone. It was of course lovely to see them, but felt like the end of an era. So imagine our surprise and delight when, a couple of months ago, my cousin unexpectedly announced that all five of them would be flying over en masse once again this Summer. I'm keenly aware that this really could be the last time we see them all over here together, as I'm sure is my aunt. The eldest is already looking at work placements for next Summer and by then his oldest sister will be preparing for college too.

This is all a very long-winded way of explaining why things have been a little quiet around here this week. I don't have any kids, siblings, or indeed much family left at all, so every moment shared with my cousin, her husband and their wonderful kids is precious indeed. The full New York contingent, plus my aunt, have just returned to London after spending a few glorious days up here with us. Mrs S & I be heading down to the smoke to enjoy a little more time with them next week, before they begin their journey home to New York. I'm missing them already.

There can be no better reason given for a light period of posts. Cherish these moments, Swede. Minutes ago, I watched a video of my wedding day, which was in August of 1994. I couldn't believe how many of our relatives hadn't been seen in years or are no longer with us at all.

Heartwarming stuff and you've got your priorities right... enjoy the rest of your time with them. So good to know you've still got that lovely connection. The pic is brilliant. Love that slightly bewildered look on your cousin's face! (Has she seen this photo lately?)

PS That's a damn fine pair of chaps you're sporting there too.

Life will always be more important than blogging Swede.

Brian. I have the same sensation when I look through old photo albums and see the many faces that have passed through, and slipped out of, my life.

C. My cousin and her husband have produced a calendar every December for the past 16 or 17 years, comprising photos of the exploits of their kids during the previous 12 months. A few years ago, I 'borrowed' their idea and produced a one-off calendar full of photos of my cousin and I when we were kids, this one included. She (and the rest of them) loved it.

SA. Indeed it is.

Swede - enjoy your time with the extended family

What was the budgie called?

The budgie, along with every other budgie we ever owned, was called Matey.

What a lovely story - Like you I am an only child so very little family around any more as the older generation have nearly all passed on. I have a lovely cousin in Melbourne however who we met up with again last year after a 20 year gap. Another cousin has just come back to this country from South Africa after having lived there for 40 years and enjoying having her around again. Glad you've been able to have this special family time this week.

As a heads up, your ears might be burning as you've been mentioned a fair bit over at my place this week! You've definitely started something.

I'm an only child too, Mr. S. so, with Alyson, we make quite the trio. Every time you post one of your "historical" photos, it reaffirms to me that you had a relatively idyllic childhood. Your parents sound like they were lovely folks and I'm quite envious that you've been able to maintain such a lovely relationship with your cousin and your aunties. Sadly, not so in my family as my mother was always willing to go to war over trivialities or imagined slights. My English gran, on the other hand, did what she could to mitigate the madness, though!

When I was part way through your post, I actually thought that your cousin's family were going to announce that they were fleeing the insanity of Trump's America, on a permanent basis, for a life in the U.K. (Think I was a little let down that I'd gotten the wrong end of the stick there!) ;-)

Alyson / Marie. My Mum was an only child, but Dad was one of eight children, so there are several cousins dotted about the country, but I'm only in vague contact with the rest of them. Myself and my cousin now living in New York were raised in the same house in Walthamstow as virtual brother and sister and the strong family bond remains.
If it were possible for them to do so, I think my cousin and her husband might well think very seriously about their future in America in general and New York in particular, but they both have careers and of course the kids are all in various stages of their education.