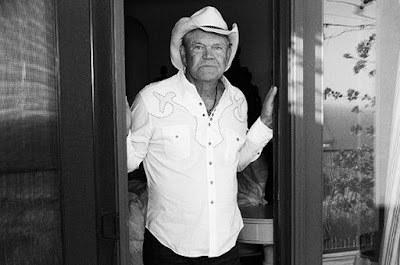 Though we all knew the day was coming, the death of Glen Campbell on Tuesday was still a painful blow. In the days since the announcement, the tributes have been warm and plentiful and much of the great man's music has received a deserved airing.

On his 2008 'Meet Glen Campbell' LP, Glen, backed by musicians such as Cheap Trick's Rick Nielson and the great Jason Falkner, covered songs by Tom Petty, Travis, Foo Fighters, The Replacements, U2, Lou Reed, Green Day and John Lennon. Also on that record was Glen's reading of 'These Days', a much covered song written by Jackson Browne, one that I initially became familiar with on Nico's first post-Velvet Underground LP 'Chelsea Girl'.

As a bonus, to round things off, here's the aforementioned Jason Falkner, performing an acoustic version of 'Wichita Lineman'. Farewell Glen.

Very cool. Not heard the Falkner version before.

Glen covers Nico - who would have thunk it

I knew you could be depended on to post an alternative tribute to the great man with a song I wouldn't have discovered myself. Perfect.

The tributes in our little community have been excellent, and this is just about as good as it gets. Well done, Swede.

Man, that JF clip was good.

Haven't heard the Nico cover before, ta very much.

Am I the only one who thinks Glen Campbell's version is far superior to Nico's?