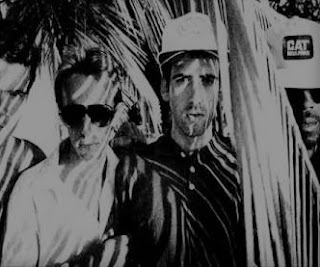 Following his dismissal from The Clash in 1983, Mick Jones helped out on the first General Public LP, then in early 1984, put together a band he christened Top Risk Action Company. T.R.A.C. comprised Mick, John Lennard from Theatre of Hate on sax, bassist Leo Williams from The Basement 5 and a certain Mr Topper Headon on the drums. It was a short-lived configuration. Before the year was out, Mick and Leo had moved on to form Big Audio Dynamite. The only evidence that TRAC existed at all is a single band photo and a handful of demos. One of those demos, 'Du Cane Road', was later re-recorded by Topper in 1985 for the b-side of his first solo single 'Drumming Man', while another, 'The Bottom Line', was radically re-worked by Mick in the same year to become Big Audio Dynamite's debut single.

Big Audio Dynamite - The Bottom Line
Posted by The Swede at 07:00

When I hear The Bottom Line now, I always think of the Dennis Hopper/Keifer Sutherland film Flashback where it appeared. A film that got slated but which I really enjoyed, Hopper taking the mickey out of his former self. "Once we're out of the 80s, man, the 90s are going to make the 60s look like the 50s".

I can't believe I've never heard that before, wasn't even aware of it.

It was originally going to be a Clash song...

I'm sure it used to be on YouTube, can't find it now though

Drew. I thought the only BAD song in 'Flashback' was 'Free'. I've never seen the film, but I'll put it on the list on your recommendation.

Dubrobots. I was certain that I'd read the Clash connection to the song at some point in the past, but couldn't find the reference when putting the post together. Thanks for putting me out of my misery. Glad you enjoyed the TRAC version.

I saw Flashback back in the day but not since- would like to see it again. I have half a feeling that The Bottom Line was initially meant to be a Clash song too so glad that Dubrobots has confirmed that. The TRAC stuff is interesting.

Had absolutely no idea about this TRAC version. Listening to it was like opening an old treasure chest. Thanks, Swede.