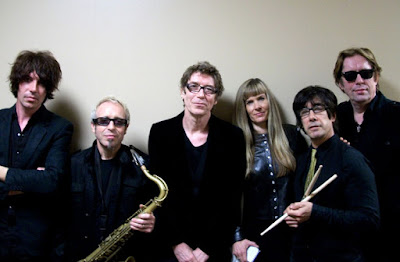 Psychedelic Furs - Torch
Posted by The Swede at 07:00

I only saw the Furs once, in 1980, in their first American show. Lots of bands touring the States for the first time played this tiny club in my hometown called My Father's Place. It was a quaint venue located under a bridge in Roslyn, Long Island, NY. Bands would land at nearby JFK or LaGuardia airport on the island and warm up with a set in this sleepy suburb before setting off to conquer the US proper. Back then the Furs were a 6-man band and could barely play their instruments. They were fun to like and were completely underground. Richard Butler had a unique voice and his lyrics were clever and cryptic to my teenage self. Maybe a year or so later Pretty in Pink got used for a big budget Hollywood feature and that pretty much ruined the whole thing.

Glad you enjoyed it George. We'll have to agree to disagree about Rod Picott!

JTFL. It looks like they've come full circle. There were 6 or 7 of them on stage on Monday, in a small sweaty venue and they played as if their lives depended on it. Butler is still a totally engaging frontman, although he did look a little like Nicky Wire doing an impersonation of John Lydon.

Also a big fan, and I catch them as often as I can. Their last trip through my part of the world back in July was the singles tour as well, but the bonus was they shared the bill with Robyn Hitchcock. Sounds like the Swede's dream show, eh?

Pretty in pink is still one of my favourite songs though

Brian. I was hoping that Robyn would follow the tour over here, but it was not to be. We got Lene Lovich as support.

Charity Chic. I agree. Some of the recorded versions of the songs don't sonically live up to the sound that's in my head, which is why it was a joy to hear them played with such gusto on Monday.

They're a band that I've long found polarise opinions, but those that like them really do carry a torch for them. Me? I'm sort of unusual in that I like some stuff - I think Dumb Waiters is a wonderful song and some of the singles are excellent - but I wouldn't call myself a huge fan.

Always been bemused that nobody has offered up an ICA....