Drinking Lemonade Through a Plastic Straw 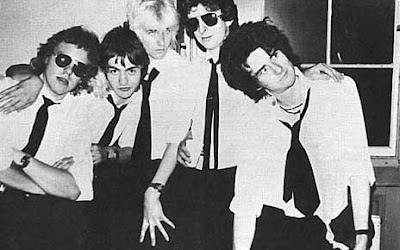 From Leeds in 1978, this is The Jerks with one of only three singles released during their four year existence. If you own a compilation album of second division punk bands, you may well find that it includes The Jerks' debut 45 and best known song, 'Get Your Woofing Dog Off Me', which originally appeared on Underground Records in 1977. The following year, now relocated to the Lightning label, the band unleashed single number two, the (to me at least) altogether more interesting 'Cool'.

I should declare a personal interest at this point, in that I was briefly in and around the Leeds scene during this period, becoming friendly with local bands The Squares, The Straits (no, not them) and The Jerks themselves. I spent many happy hours rolling around Yorkshire in the back of various bright orange Salford Van Hire vehicles, choking on the exhaust fumes, while trying not to become buried under guitars, amps and drums everytime we swung round a bend. Good times.

Labels: Leeds, The Jerks, The Squares

Ah TS, we want more tales from you please! I have vague memories of these bands but would love to hear more from the horse's mouth. Coincidentally I touched upon my own 'travelling with a band' experiences over at Rol's place and I'm now mulling over the idea of doing a little series on it, so we could compare notes! We certainly share the same memory of exhaust fumes....

I have some similar tales of my own, though in fairness not too many of interest. I'm sure there's a few others out there who have stories to share. A collaborative series, perhaps?

Love these tales from your youth. Enjoyed C’s comments at Rol’s too.

Fell down a bit of a YouTube rabbithole with this lot, ended up listening to four or five of their songs. Cool is definitely the best, but I enjoyed the Leeds accented punkier tunes too, even Get Your Woofing Dog Off Me, which wins points on its title alone, but wouldn't stand up to repeated listens like Cool.

More such tales (and tunes) from all of you!

Like these posts where you go back in time - Good times as you say, despite being buried under guitars and amps.

You'll not be surprised to learn I hadn't heard of this band before but looking at the picture of them, it could be a shot from our 1978 6th Year common-room - Eton it wasn't and those boys were a scruffy lot!

The Jerks are new to me. Agree Cool is very good, especially the guitar work