In 55 days I will turn 55 years of age. To mark this...ahem...momentous occasion, I'm going to attempt, over the next 55 days, to post a song for every year of my life so far. Some will be personal favourites, others obscurities. I'll try to avoid anything I've already posted (or have made other plans to use in the future) and will also exclude the obvious towering presences in my musical life - so no Dylan, Clash, T.Rex, Miles Davis, Lee Perry etc. Oh, and of course, only one song per artist. Could be tricky. 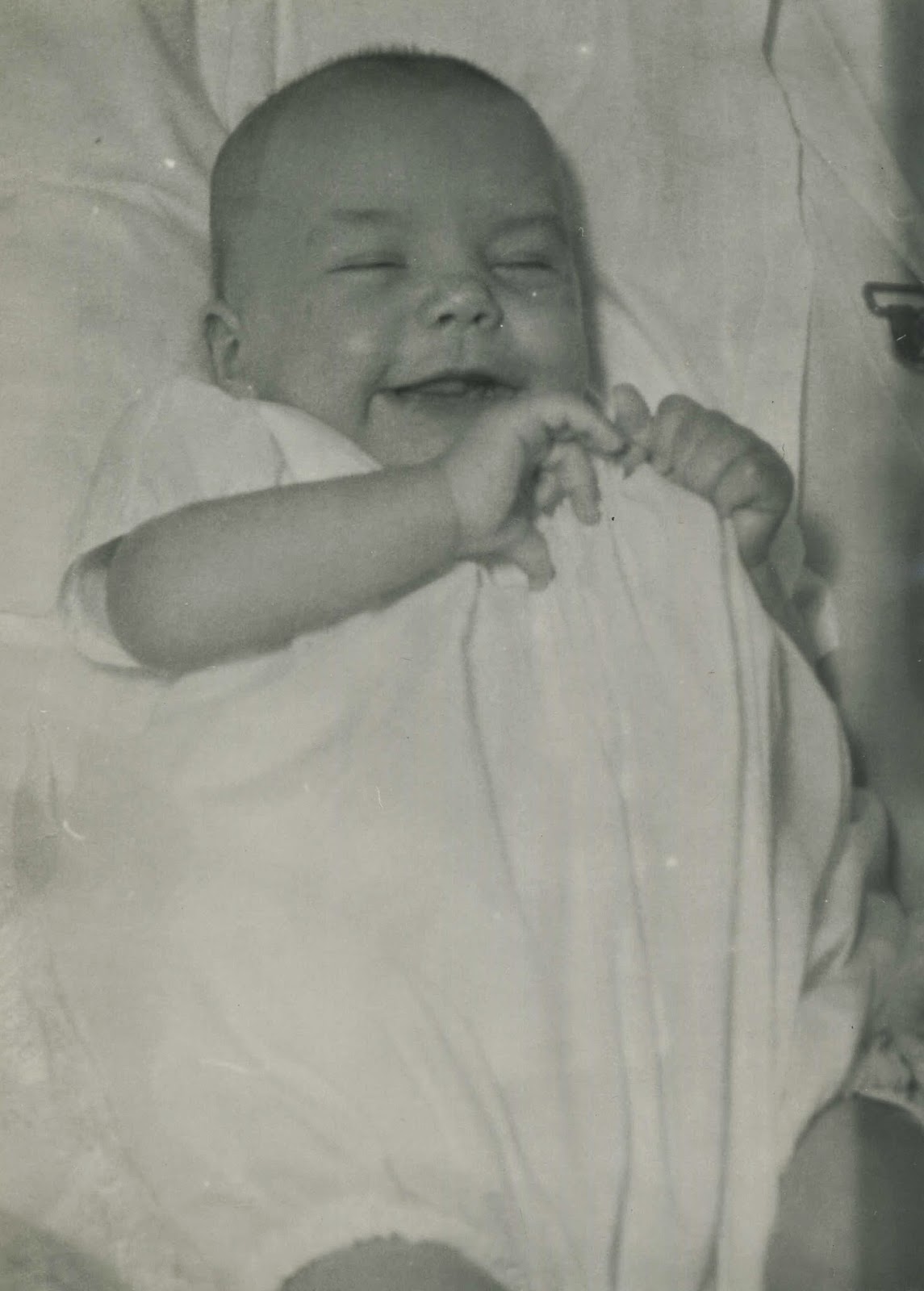 Having a laugh at a few months of age.

So let's start at the very beginning. Number 1 in the charts on the day of my birth, and for most of April 1960 in fact, was 'My Old Man's a Dustman' by Lonnie Donegan. Before I came along and before he married Mum, my Dad was a frequent visitor to Soho’s Jazz clubs, often to see Ken Colyer’s Jazzmen or Chris Barber’s Jazz Band, both of whom featured Donegan on guitar and vocals. Dad continued to follow Lonnie for a while after he went solo and I still have a few of his original records in my collection.

Donegan was a very influential figure in the pre-Beatles UK charts, amassing a total of 31 top 30 singles between 1955 and 1962, several of them interpretations of  traditional American Folk and Blues songs. 'My Old Man's a Dustman' was one of his occasional Music Hall inspired novelty hits, which perhaps diluted his true legacy a little for later generations, though even on this single, the b-side featured a strong version of the Child Ballad 'The Golden Vanity'.

Becoming aware of Dad playing his 'My Old Man's a Dustman' single in the early 1960's counts as one of my very first musical memories. Dad sang along, very loudly, with most of the records he played and songs he heard on the radio, a habit he never grew out of. (To the extent that, following his death 47 years later, Mum claimed one of the greatest challenges she had to face, was to become accustomed to the deafening silence that settled on the house.) In the case of 'My Old Man's a Dustman' he also had to try to explain the lyrics to his little boy. 'What are 'cor blimey trousers' Dad?'

What a great idea, Mr. S! I can't wait to see what you've got in store for us over the remaining 54 days.

"My Old Man's a Dustman" was heard on the radio in Canada too. I wasn't terribly impressed by that one. (Did he also do a song with this line: "Does your chewing gum lose its flavour on the bedpost overnight?" It was a number of years before I heard "Rock Island Line" and understood that he'd inspired many British teenagers (i.e. The Beatles) to take up guitar themselves.

Thanks Marie, I hope I have the time and stamina to do 55 consecutive posts! I've prepped a few in advance just in case.
Not only was 'Does your Chewing Gum...' a line from a song, it was also the title. Unfortunately, these two novelty numbers, fun though they are, were his most enduring hits.
'Rock Island Line' was one of the first records purchased by John Peel and Peel was moved to tears when he finally met Donegan in the 1990s.

As Marie says a great idea and an ambitious project.
It's a shame that Lonnie is best remembered for these two novelty songs when he produced some great and very influential music

Wow, yes what a lovely project and it's going to be so interesting to see your selections. I love the personal background to your choice for today, although, I actually thought you were going to say: "before I came along and before he married my mum, my Dad was a dustman" ;-)
Look forward to your future picks!

Thanks CC & C (!) I've been mulling over this series for a while now and am suddenly a bit daunted now it's actually started!

It's a fantastic idea Sir. Looking forward upcoming 54 days. As Lonnie Donegan sung I'll have drink on you

I can't wait for these.

That's a fantastic memory to have of your Daddy.

Cor Blimey trousers? Search me. Though they're probably best worn with a Bippity Boppity hat. And I haven't got a Danny what one what one of those is either.

Classic song to kick off a classic concept. This used to be on the radio all the time back in the 60's, didn't it? Quite wonderful. Looking forward to the whole countdown.

Wonderful start! By the looks of these comments, all of us readers are very excited about this series.

Thanks for all the encouraging words folks!