I've written about Dad's love of music a few times, how it drifted from Jazz in the 1950's to Pop in the 1960's and on to Classical in later life. He was never interested in Rock 'n' Roll, yet owned virtually complete sets of Buddy Holly and Roy Orbison singles, many of which I still have. I think it was the quality of the songwriting that attracted him to these particular artists. He had good taste too. All these years later Buddy and Roy are legends, while other popular artists of the day have faded from memory. 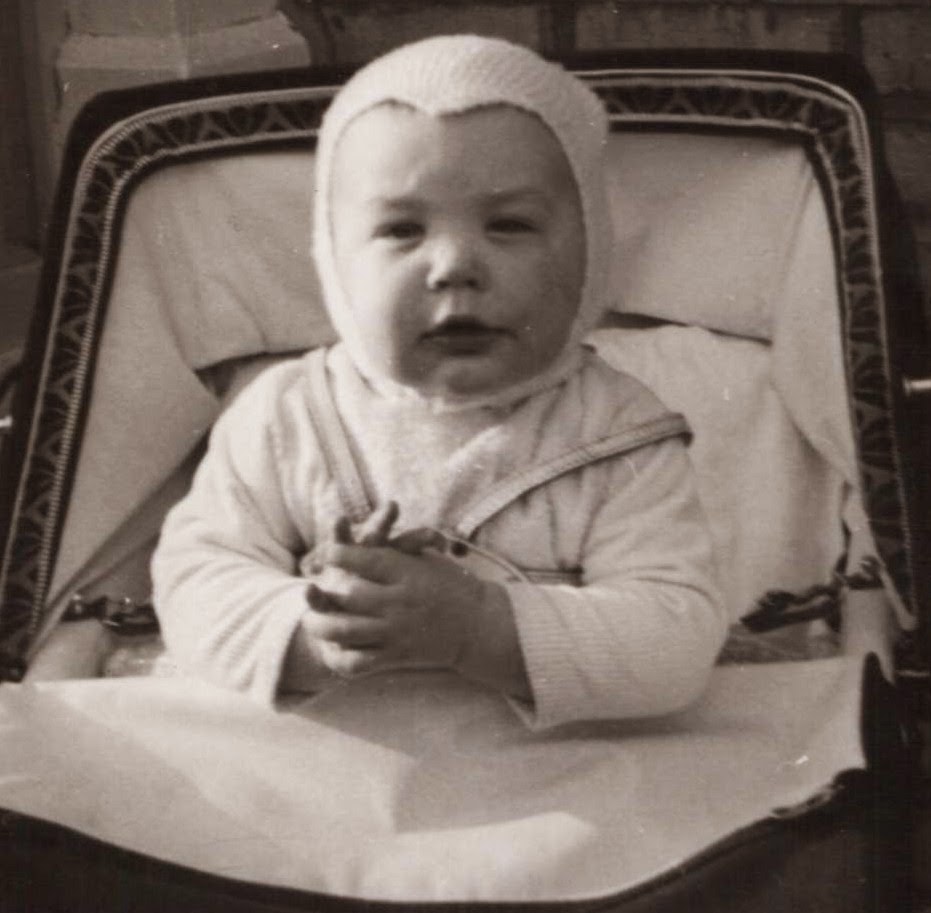 The drama of Roy Orbison's songs captivated me as soon as I was old enough to pay attention, evident even in lesser hits like 'Blue Bayou' and 'Borne on the Wind', but dominant in 'It's Over', 'In Dreams' and most of all here, in 'Running Scared'. One day (I don't know how old I was, 5, perhaps 6) as I listened to this song, I can remember feeling my eyes tingle and tears starting to form. It was frightening, I thought something was wrong with me, but, even at such a young age, I was already picking up on the emotion in the writing and performance. 50 years later, it's still a challenge to make it through 'Running Scared' unscathed.

You really were one adorable baby, Mr. S!

Roy made some distinctive records over the years. I particularly like a couple of his Sun singles and some of his '60s releases on Monument: especially 'Mean Woman Blues', 'Dream Baby' (which I posted a couple of years ago) and the huge hit he had at the height of Beatlemania in North America: 'Oh, Pretty Woman.

This is a fun series.

Thanks Marie. Unfortunately the older I got, the less cute I became!

Some of those Roy Orbison tracks were so innovative - I can't think of anything else to compare. Just amazing. I really liked a lot of the stuff he did in the late 60's (I think much of it released on RCA here - I could be wrong) - around the time of his hit 'Penny Arcade'. Nice hat.

I have discovered Roy Orbison late. All the more I have his music love qualified. There are few artists who have appealed to me with her voice emotionally so.

You look like a villain from the old Flash Gordon serials.

Aww, you're looking very pensive in that pic, like you're hatching some cunning plan... !

Interesting what you say about the emotion in Running Scared getting through to you at such a young age. I wonder if it's something about that bolero type rhythm? I'm sure that some universal responses to music are in us from a very early age - that beat alone seems to be full of dramatic tension!

There are few singers who pack more of an emotional punch with their voice than The Big O. Even in his later material from Mystery Girl he could still move you in a way that most other singers could only dream of.

Of course you just had to post a Lonnie Donegan to start the series with. And an absolutely belting song today.

SB. I agree. I might come back to The Big O's later years one day.

Walter. It's never too late - enjoy!

Eric. Mini-ming. I nearly sprayed the screen with a mouthful of coffee when I read that this morning!

C. Interesting thoughts. Music (reasonably good music thankfully) was introduced to me from an extremely young age. Perhaps discovering those early emotional responses explains my life long obsession with it.

Scott. It was wonderful that Roy was rediscovered before he died. His great talent remained intact until the end.

Let me tell you... sure wish my father had left me a stack of Roy Orbison and Buddy Holly singles.

Brian. He didn't so much leave them to me, as I relieved him of them in the 1980's, by which time he was more into classical music. I was worried that they might end up in a charity shop, as I'm sure some of his collection did.

The big O has always been a favourite of mine back then and still to-day of course. His biggies are up there with the best that 'rock' has to offer.