At the end of August 1964, Dad sat me down in front of the family reel to reel tape recorder to interview me, much as he did from time to time, right up until I was about 7 or 8 years of age. On this occasion the talk was all about school. My first day was fast approaching and I was really looking forward to it. He asked me what I thought I was going to do at school. 'Play football' I confidently replied. 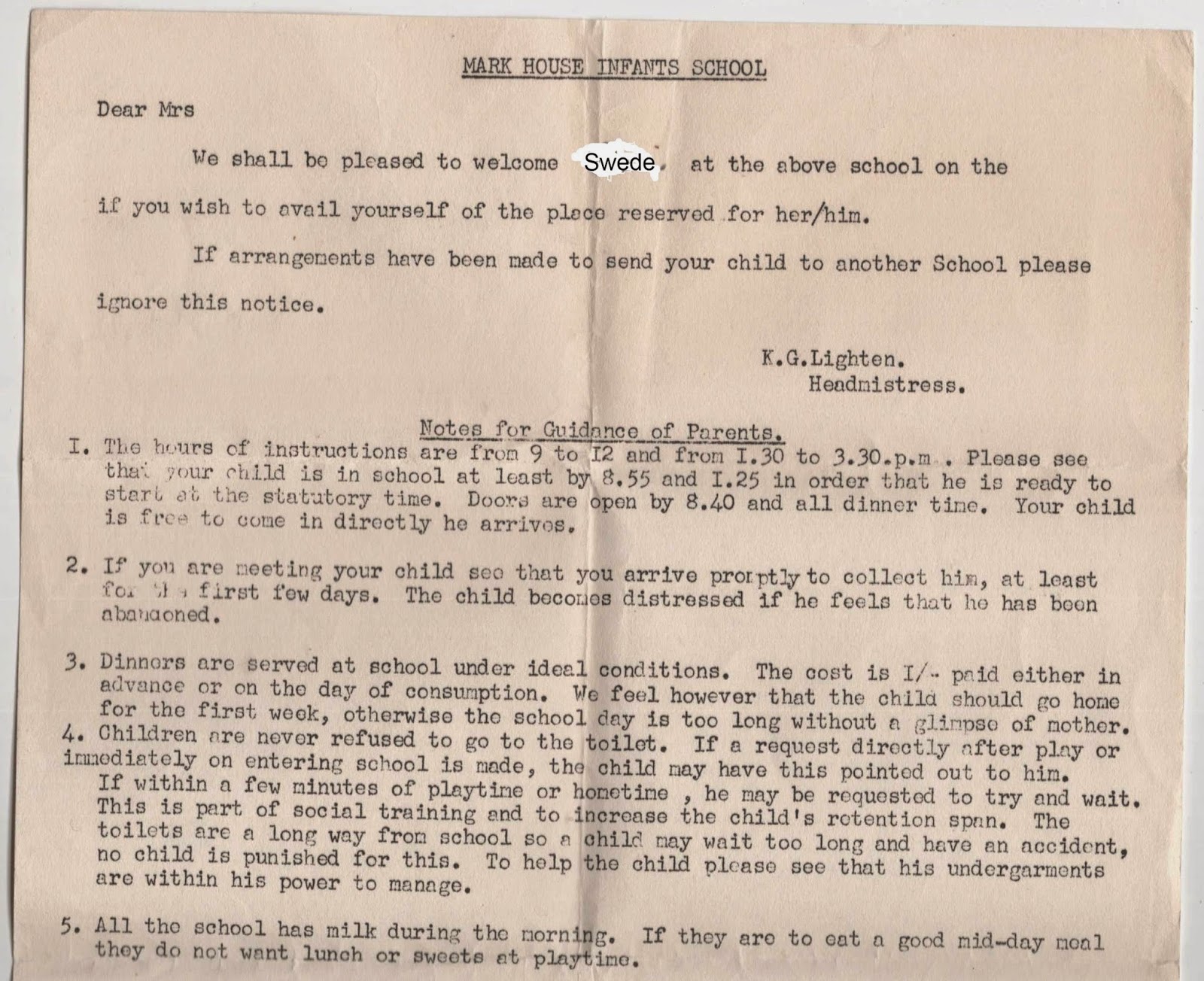 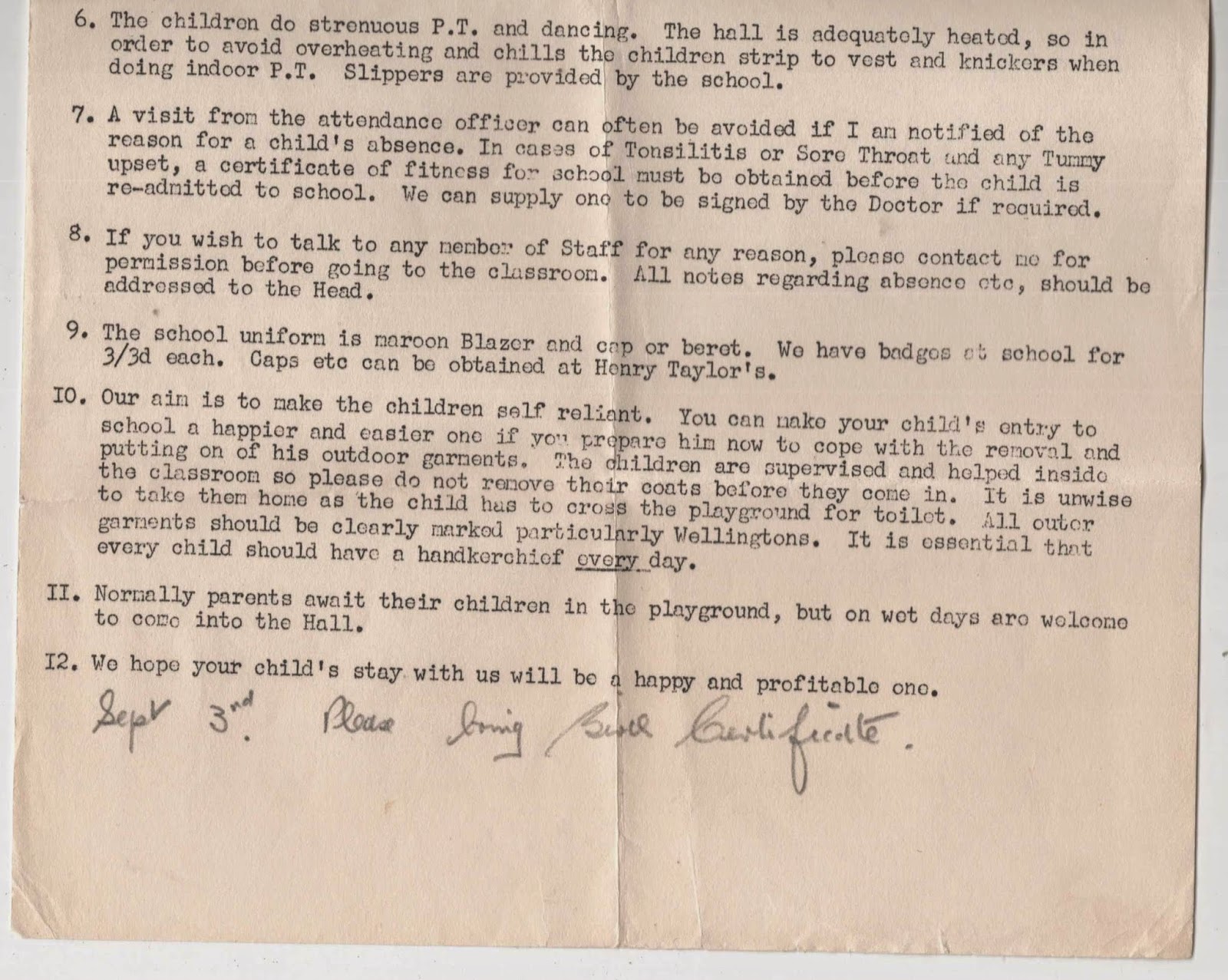 The original letter sent to my parents prior to my first day at school in 1964. Note point 2. (Click to enlarge)

When the big day finally arrived, I was keen and eager to get going. I'd chosen my clothes the evening before and even told Mum what I'd like for lunch - soup, so family legend has it. Then, clutching Mum's hand, we walked the short distance to Markhouse Infants School. The Mothers of all the newcomers were invited to stay for a short while to ease the transition for their children, before being ushered quietly from the room. Mum gave me a little wave as she left and with her went every shred of my confidence. The flood gates opened and I cried. And cried. And cried. After an hour or so of me howling the place down and no doubt having tried every soothing trick in the book, one of the teachers phoned Mum to ask her to come and get me. I was an utterly traumatised wreck, though later, when it became apparent that Mum hadn't abandoned me forever and would be there to collect me each lunchtime and at the end of every day, I settled into school life quite happily. 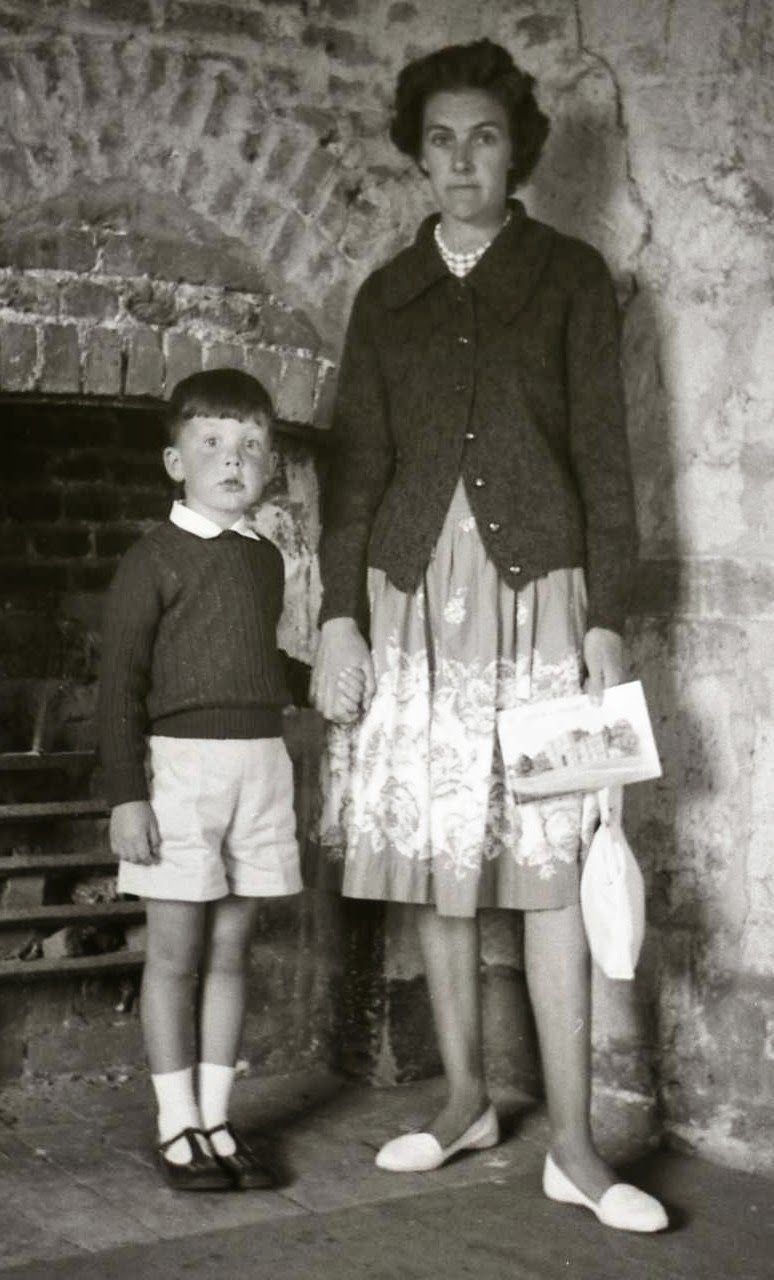 Earlier in 1964, West Ham United won the FA Cup, beating Preston North End 3-2 in the final. Dad, though approaching the end of his interest in football, went to the match at Wembley, then, a few days later, took me to see the team's victory parade through the streets of the East End. I found this marvelous converted cine film footage of the parade, which is a fascinating little time capsule and well worth a look, football fan or not. 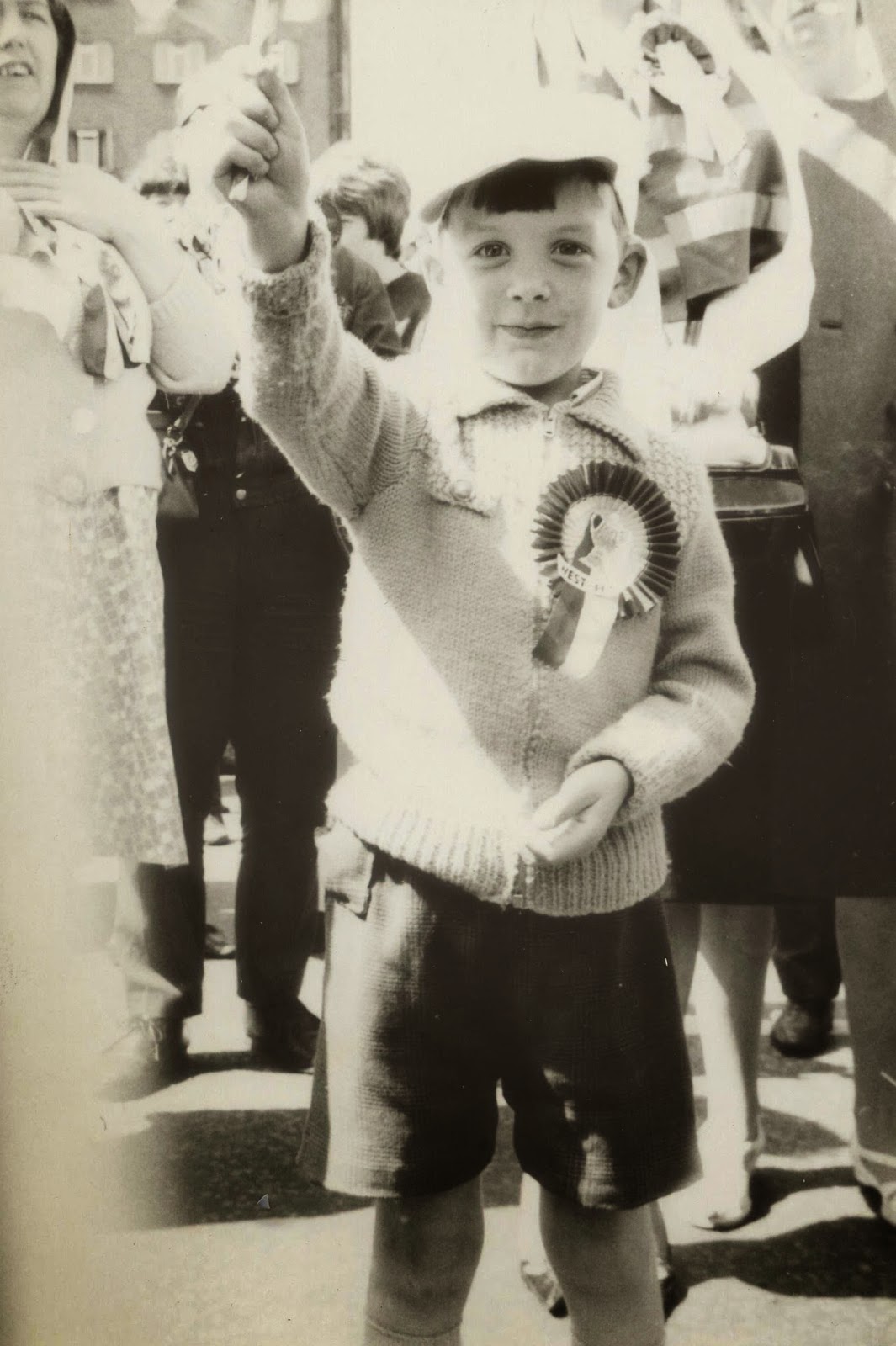 Here I am in the crowd, a little overwhelmed, not even a football fan, but wearing my rosette with pride. 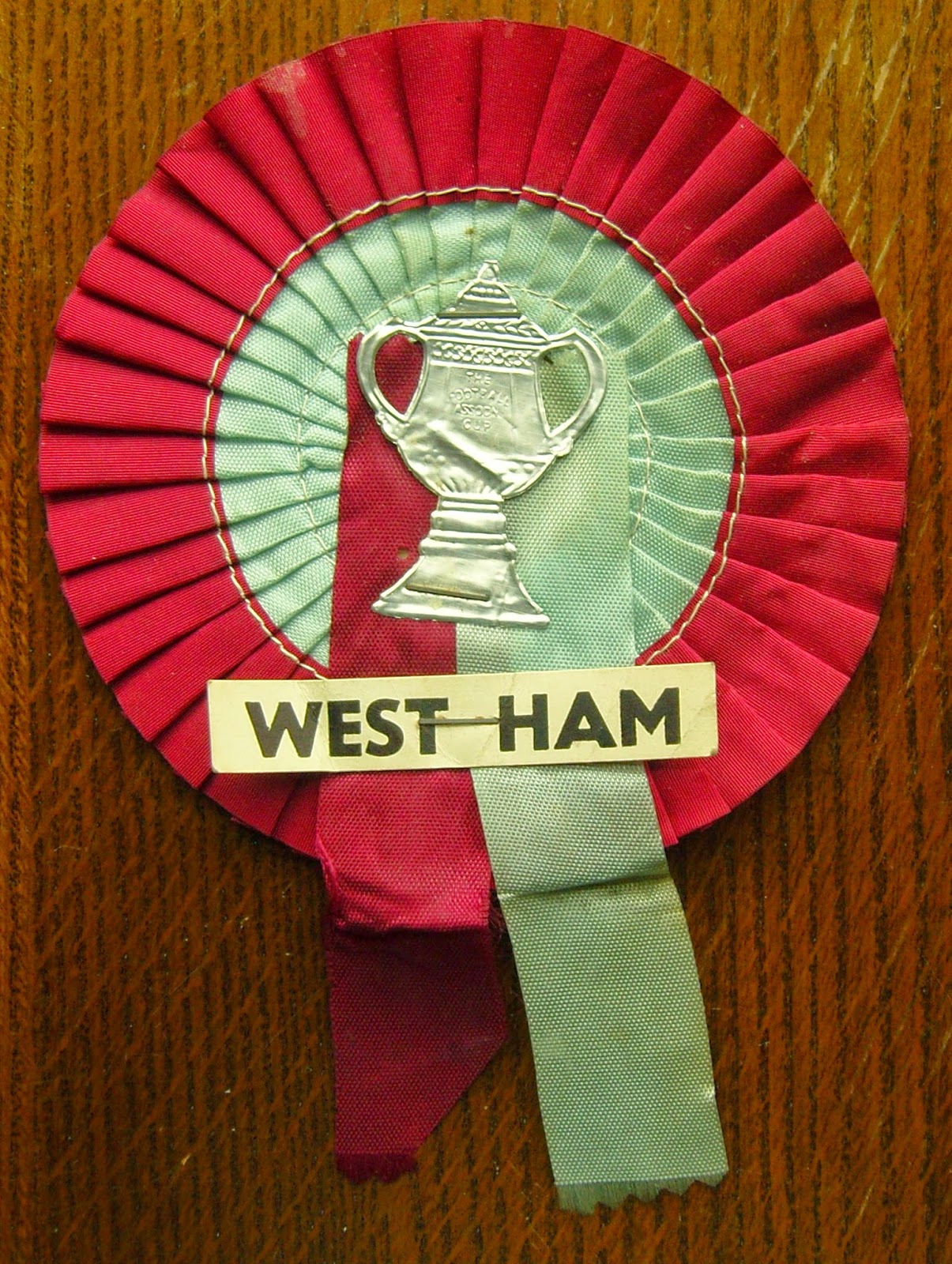 And that rosette? Still got it!

Some of the tunes accompanying this series of posts might be obscure, others better known, while a few will be absolute classics. Today's selection falls into the latter category and was a firm favourite on the family radiogram in 1964. Honestly, does pop music get any better than this?

Of COURSE you still have the rosette. Was that a snip of lads wearing knitted West Hamn hats? And had those other lads pegged those coloured cards to their spokes? Really interesting piece of film

A true classic, Mr. S.! It's a treat to hear it in MONO too - all of the Petula Clark reissues are in stereo (not the sounds we originally heard.) I look forward to checking out this series every day now. Oh no! There are only 50 more to go . . .

What a lovely post. I particularly enjoyed the school letter - if only we had understood at the time some of what was explained so kindly in that letter (e.g. about going to the toilet!) So sorry to hear you cried so much on that first day.. I do remember it being very bewildering. I'd had a little bit of nursery school experience first and I guess that may have helped me with the adjustment, plus I remember being given a Twix (my first one, how magic that golden wrapper seemed) and that helped! But being away from home and Mum is such a big deal when you're that small, isn't it?
Whilst football is something I neither know nor care about I love the cine film - what a great portrait of ordinary people and London 1964. Lovely stuff. And of course, Petula - yes, a classic, and justifiably so.

No, pop music does not and cannot get any better than 'Downtown'.
Fabulous post, BTW. When I was a kid, form about '69 on, I was a massive West Ham fan, so I'm quite envious of you witnessing such history. Bobby Moore with the cup on the top of a bus! I think the reason I became a West Ham fan was (a) because I loved Warren Mitchell's 'Alf Garnett' character (OK, I didn't realise what a bigot he was!) and (b) my mum was brought up in south east London, so an affinity with West Ham (not spot on, II know) seemed fair enough. Never got to Upton Park but did manage to see them play a few times. The cine film was truly wonderful. Up The 'Ammers!

This series just gets better and better, Swede. I trust your Wellingtons were clearly marked and you always had your hanky. It's so great you still have that West Ham souvenir. Truly, you have set the bar high for the next 50 posts.

I love that video...that's brilliant.

I'm also glad to know that the schools and the local tailors have always been in collusion.

George. I think it was claret and blue ribbon threaded through the spokes. Simple, but effective.

C. That first day of school is one of my vividest early memories, presumably because of the trauma! I fell down the stairs earlier in 1964 and I have clear memories of that for similar reasons.

Singing Bear. Dad took me to Upton Park a couple of times, but, truth be told, I've never really been that into football. My main memory is of how close the pitch seemed to the stand. Funnily enough, I went back to the ground five years ago for a meal in their restaurant! My Aunt lives close to the ground and we went there for her 80th birthday and were given a guided tour throughout and onto the pitch. It's changed a lot since the 1960's!

Brian. Haha! My name was sown in, or written on, everything! Thanks for your kind words. Not sure if I can keep up this pace!

Erik. Schools and tailors. A nod, a wink, a secret handshake and a never ending contract worth thousands.

A lovely post and reminds me of that first day at school myself, albeit at the other end of the country.

Just discovered your blog in the last few months really so didn't realise there was so much in the archives that is similar in a way to what I do - Yes, I've covered Petula as well and thrown in a few of my memories of childhood in the '60s.

As for the football we had a team up here that did rather well in Europe in the early '80s when Sir Alex Ferguson was in charge - Will really have to do a post about that time at some point as well - My notebook of "post ideas" is brimming though and here I am with no PC at the moment (this is my husbands I'm borrowing at the moment) and not really enough time to write them. Housework has taken a back seat this year!