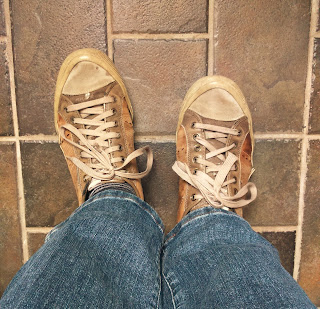 The first gift my Mum ever gave me was in April 1960 - it was of course the gift of life. Exactly 50 years later, her last gift to me was this pair of trainers. By April 2010, by then too ill to go out to the shops herself, Mum asked me what I'd like for my upcoming birthday. I mentioned that I'd been thinking about getting some new trainers, so she gave me the money and told me to buy myself a pair. I wore them out and about for over four years, before demoting them to indoor wear only. Now, a further three years down the line, the soles are so completely non-existent that I can't put it off any longer - the time has come for them to be dispatched. I know it sounds a bit daft, but I felt that I needed to take a photo of the trainers before they went. It's like a last direct connection with Mum is disappearing with them.

No songs about trainers spring to mind by way of a tribute to my loyal old pair, but I can offer 'Shoes' by Brook Benton. Written by Don Covay & George Soule, 'Shoes' was released as a single in 1970 and came into my possession by way of a second hand Atlantic Records soul compilation three or four years later. It's the only song I've ever owned by Brook Benton, but I surely do love it.

George Soule, was that his real name? Perfect for a song like this. Great song, love it, love Brook's voice.
Farewell to your dear trainers. I think of shoes like people - after all the journeys they go on, they wear out eventually.

I would have snapped a photo too. This was very touching, Swede.

I only know Brook Benton from my giant 8-disc Atlantic Rhythm And Blues 1947-1974 box. Benton only got one song on the entire set, and it wasn't even "Shoes." So, before today, I only knew one song too. I can highly recommend "Rainy Night in Georgia."

I'm reminded of the story of the husband who couldn't delete his wife's ansaphone message from their landline.

Lovely idea to take the picture. A last hurrah for them.

A very touching post, Swede, and while I don't think it's in the same league as Brook Benton, I can at least offer one trainer song in return...

Not daft at all.