Mum showed remarkable resilience after losing Dad in 2007. Her broken hip recovered well and she kept herself very busy. She'd always been the outgoing one and now threw herself into voluntary work in the WRVS cafe at the local hospital and at a couple of charity shops in town. She also built on strong friendships with several near neighbours. I kept Dad's car and drove down to stay with her at every opportunity, taking her shopping once a week and to the hospital once a month, for a consultation with a Myeloma specialist. Outwardly she was coping well with being alone after over 50 years of marriage, though an Aunt let it slip that Mum had mentioned that she found the deafening silence in the house very difficult to adjust to. Dad had always been a very noisy man! He sang, whistled, drummed and generally crash, bashed and walloped his way through life. Mrs S will be happy to vouchsafe that his son is following in his Father's noisy footsteps! 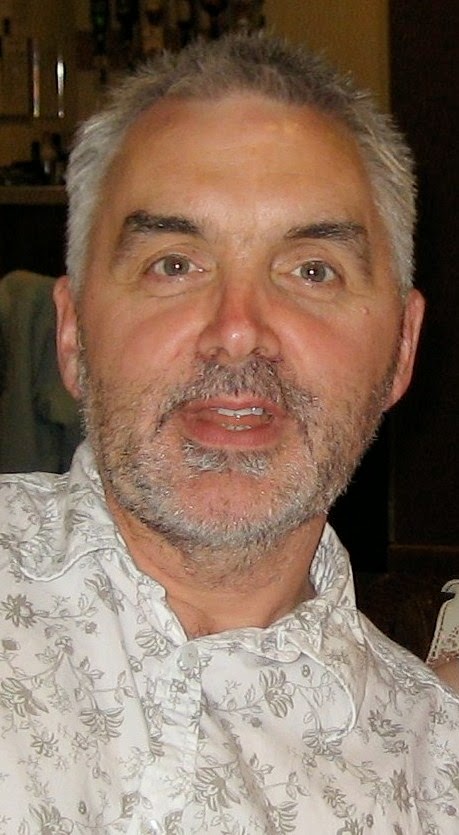 I was busy too. I'd been given yet another coffee shop branch to open (this one on a trading estate) with another newly recruited team. On my many drives to and from Ipswich to visit Mum, I listened to a lot of spoken word - audio books, comedy, Radio 4. On the rare occasions that I actually played music, it was usually a Minimal Techno compilation. 'Enfants' by Ricardo Villalobos is minimalism taken to the Nth degree and the perfect tune to take out on the road when your brain is full to overflowing. The looped sample is taken from Christian Vander's 1995 choral reworking of Magma's 1973 prog-rock classic, 'Mëkanïk Dëstruktïẁ Kömmandöh'. This one won't be for everybody.

A loop from a choral sample of a reworking of a European prog-rock classic: perfection! It's interesting how there are times when one just needs the bare bones of music. Perfect driving soundtrack.

I've been running a lot the last couple of days and when I pulled up the blog yesterday...and started to get a wiff of where that was headed I stopped reading. Rather than take it in at 80 mph...just wait til I could sit down.

Man...your relationship with your Daddy, as presented here, seems so familiar and touching. Just hated knowing where the story was going. Then for you not to be able to get there on your own...the vague alarming information. What a nightmare.

Then to think of your Mother and having to deal with it...and the absence.

I love that you've done these posts...but I guess tough years are unavoidable.

Swede, I have lots to say about your mother's situation... but I need to keep this light. So, I will congratulate you on adjusting to all of that corporate speak. Second store, eh? The powers that be must have realized you were a gem.

Singing Bear. I'm so glad you enjoyed the little minimal sidetracks I made a long the way. The miles really do just disappear.

Eric. Thanks man - that means a lot. I wasn't sure how deep I wanted to dig, but it just kind of wrote itself, which is very unusual for me.

Brian. This was actually my third store, plus I was shipped in to help out with a number of other new store openings on my area. I was a bit of a headless chicken in those days!

Drew. Not until now. Playing it as I type - incredible! Thanks for pointing me towards it. Singing Bear, you need to check out this tune too!

Also very good is his remix of Shackleton's Blood On My Hands, although it is slightly disturbing