In 2010 I hit 50. It was a year that began with an unexpected work related triumph and ended in deep personal sadness. In the Spring, at the company's annual conference, I was named store manager of the year, in front of 3000 of my peers. The award was a complete shock and came with a significant financial reward. On the day, though grateful, my mind was elsewhere. After Christmas 2009, Mum's condition had deteriorated sharply. Up to then she'd still been quite active, but now she couldn't walk more than a few steps and was unable to leave the house unaided. Her medication was no longer keeping her illness under control. 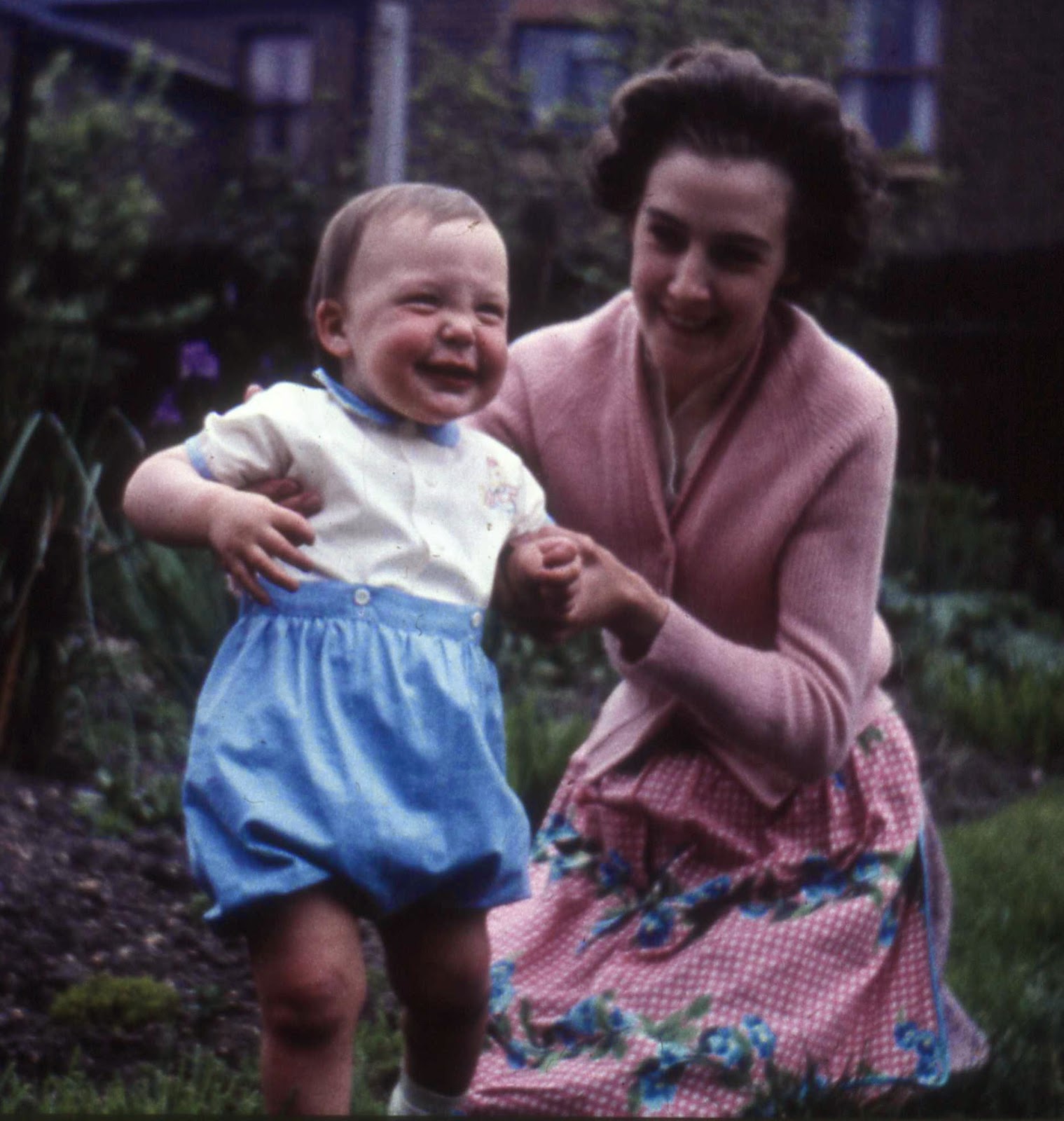 Mum encouraging me to take my first steps in 1961.

I applied for a period of unpaid leave from work, which was eventually granted, and spent the next 6 months staying with Mum for 4 or 5 days a week, while professional care was given by daily visits from District Nurses. I bought a collapsible wheelchair that I could throw in the back of the car and, when she felt up to it, took her out for country drives, trips to the coast and pub lunches. Throughout this period her health waxed and waned and she spent a number of short spells in hospital, 'to recharge the batteries'. It was a privilege and joy to be able to share so much time with Mum during those months and when she passed away in December, the grief was, and is, exceptionally crushing.

My most prominent musical memory of 2010 is from Friday June 25th, when Mark E.Smith strolled onstage at Glastonbury, wearing one glove, to join Damon Albarn, half The Clash and the rest of The Gorillaz for a storming, glamtastic, 'Glitter Freeze' from the 'Plastic Beach' LP. It's just perfect, from Mick Jones' welcoming, '..alright Mark?', onwards. The only thing missing from the performance is MES's classic spoken intro to the studio version of the song - 'Where's North from 'ere?'.

Some huge respect to you staying unpaid to support your mother and giving her some good days before she passed away. I was almost crying reading your warm words.

Beautifully written, Swede. You may not have been able to have a proper goodbye with your father, but you certainly did your best with your mother. I hope I'm able to do the same. As Walter said, warmed the heart today.

Love and loss - you cannot untangle them. You can hold you head high knowing you did all you could. Life gives us these terrible kicks. Thanks for sharing this, TS.

What a lovely son you were to both your parents. As has been said above, in spite of the sadness, this is so heartwarming. I was struck too by the fact that just a short time before losing your mum you had won the award (congratulations!) and how life gives us such sharply opposed highs and lows to deal with at times; somehow the presence of those two hugely contrasting events in such a short space of time just sums it all up (if that makes sense!) Shadows and light.

Nothing to add to the above comments - a very moving post

I can't add anything to what anyone else has said about the post.

MES wandering on stage in this clip always makes me smile. You know that more than have the audience are thinking "who the fuck is he?"

Another very moving piece of writing, and again very brave to share with your readers.
Re. the song, ME Smith's somehow has great presence, prowling around and snarling away. Although, as Drew says, I wonder how many of the youth are thinking "who's that old bloke"?

This was the most difficult year to write about. I had to keep it brief and was pleased to be able to at least lighten the mood of the post a little with the featured tune.
Thank you all so much for your warm words.