I mentioned in the last post that at the time of our move to Ipswich in 1975, Dad had no job to go to and I had to get stuck in at my new school pretty quickly to stand a chance of having any success in my forthcoming O-Level exams. In the event Dad was quickly taken on by Debenhams as their new warehouse manager, while in 1976 I unfortunately flunked most of my O-Levels, eventually staying on for an extra year in an attempt to salvage something from the wreckage of my education. 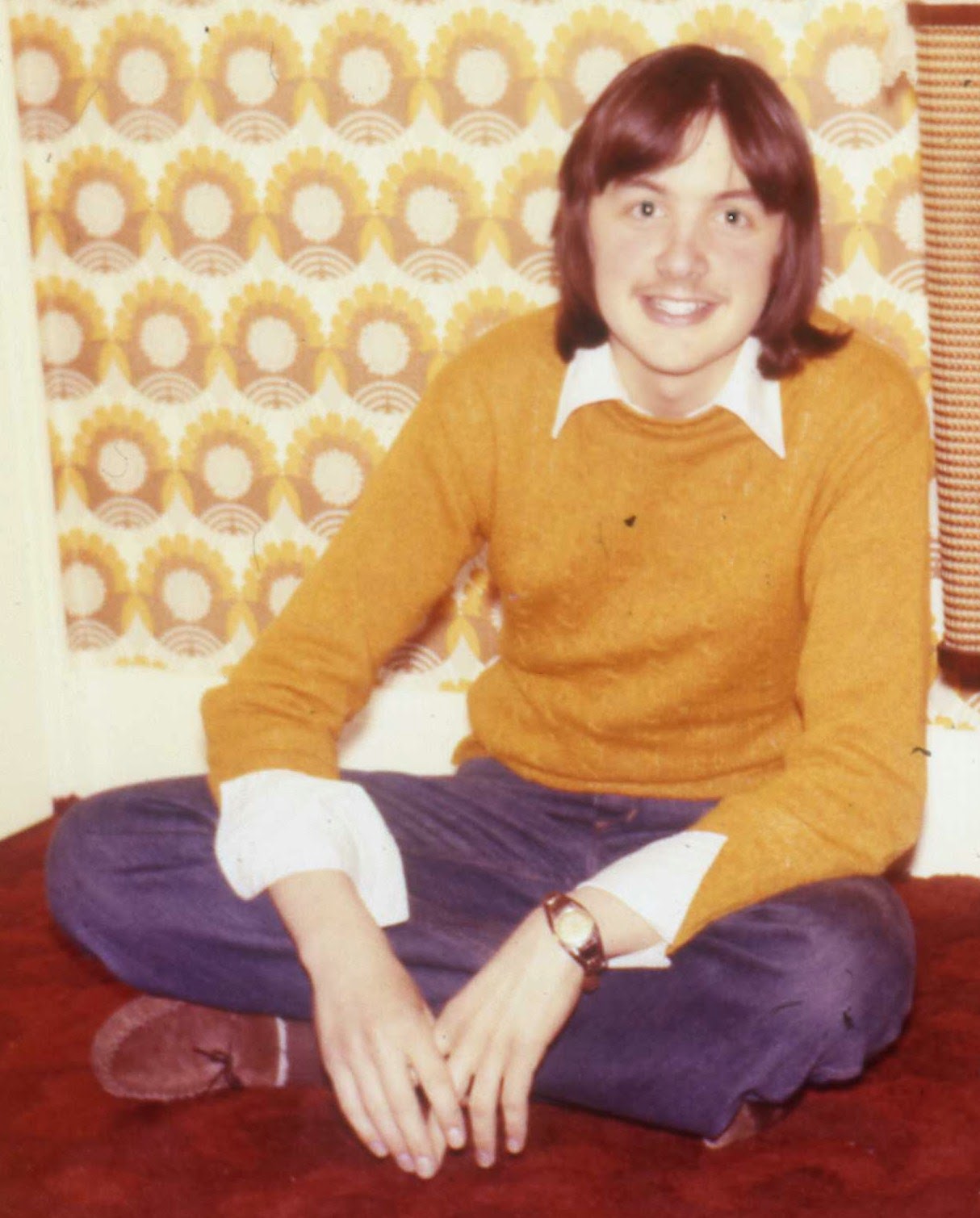 An ill-advised early attempt at a moustache. 1976

In London, Punk was starting to happen. Meanwhile, in Ipswich I was busy catching every band that came to town, regardless of musical genre. So while the Pistols & co were causing chaos in the capitol, I was grooving to Brand X and Isotope, headbanging to Black Sabbath, Judas Priest, Uriah Heep and Widowmaker, stroking my chin to Barclay James Harvest and Fruupp and tapping my foot politely to Andy Fairweather-Low and Kiki Dee.

The changing musical times were making their mark on my record buying habits though. The fantastic 'Live at the Marquee' EP by Eddie and the Hot Rods, for instance, was rarely far from my turntable in the Summer of '76. Today you get two tunes for the price of one.

Moustaches were quite the rage over here in the mid-'70s too. It's funny, you're such a chameleon - you look like a different person in every photo! Did you ever go to a Northern Soul allnighter, Mr. S?

I think we all change a lot at that age Marie, don't we? It is interesting to see me shooting up again though!
I've shared a 'tache photo (and my thoughts on the dreaded thing!) before and unfortunately there are more to come - you have been warned!

Actually, I think the tache suited you!

If I posted pics of myself from Jr. High and High School, there would be great mirth all 'round.

I loved that early Eddie & Hot Rods sound, although I didn't know of them until 'Do Anything You Wanna Do'. Although the latter is very Springsteeny-sounding to my ears now (and you know I'm no fan of Springsteen) I still love it. One of the first singles I bought and the words were perfect. So I have soft spot for them!
That combination of colours in the photo could only have come from then couldn't it?
Are you sure that wasn't just a hairy caterpillar resting on your top lip? I hear there was a plague of them in the '70s.

Didn't it all started with bands like Eddie and the Hot Rods who had the new power and the talent to write short songs (the 101ers are another one). I liked them much.
@ C.not to have a moustache was a no go in these days when you were young. But it was only a short periode.

Which came first, the ganzie or the wallpaper?

Marie. You're not the first person to say that! More facial hair variations later in the series too!

C. I see what you mean about 'Do Anything...'. It has an anthemic quality about it doesn't it? Gotta love it though!
Bumfluff - I was almost willing it to grow!

Walter. The Rods, 101ers and of course Dr Feelgood all played their part in kick-starting punk. Glad you enjoyed it.
I wish my moustache period had been even shorter!

John. Had to Google ganzie! I was still modelling the one in the photo 20 years later.