One of the guys at the office rented a large house just off Christchurch Park, a pretty nice part of Ipswich. He took the biggest room and sub-let the rest to friends and co-workers. I'm not sure how legal the sub-letting actually was, now I come to think about it. When one of his 'tenants' gave notice, he made it known at work that he was looking to fill the room. Without thinking too much about it, I said I'd take it and that evening, told Mum and Dad I was leaving home. I'm utterly appalled at my younger self for the way I dropped this bombshell on my parents. They knew the day would come, but were clearly hurt at the blunt way I broke the news, something my immaturity couldn't comprehend, yet to their immense credit they still helped me considerably when the day of the move came. 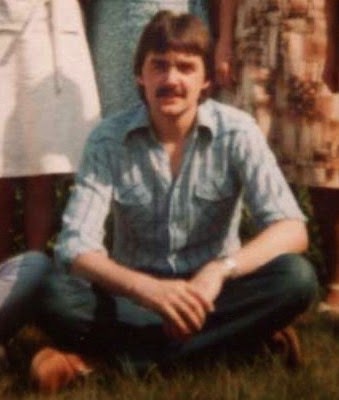 It was at the end of 1979 that I started working in a record shop. I wrote about those early days on the other side of the counter a couple of years ago (here). Earlier in the year, around the time I was leaving home, I bought 'Telegram' by The Monitors, a glorious, jangly little thing that I love dearly. I loved it so much that I also bought it again a couple of months later, when the single was reissued on a major label. Over the years, when times have been hard and money short, I've reluctantly exchanged bits of my record collection for cold hard cash - and usually regretted it. But I've never regretted anything quite as much as selling my original Monitunes copy of 'Telegram'. What a fool I was.

This post really hit home! Firstly, it brought to mind my parent's reaction to my own announcement that I was leaving home - completely different to your experience and still painful to recall to this day. You're so lucky that they were still supportive of your need to assert your independence. Secondly, I have similar regrets to yours regarding the selling of many of the rarest items in my record collection.

You're doing an amazing job on this series, Mr. S!

Given your size I suspect you had a large appetite so they were probably glad to get rid of you! Seriously at a young age you tend not to think of others. Slightly older than you then I set of traveling with £100 in my pocket not giving a thought about hoe apprehensive my folks must have been

Marie. It's not even the rarity factor particularly, it's just a little single that I really love. Years later I picked up the A-side on an indie compilation and have since downloaded a rip of the b-side from another blog, but of course it's not the same.
Thanks for the encouraging words!

That Monitors single just screams John Peel to me! All low-fi and stripped down, very much the sound of '79...
Indeed we do/say all sorts of things when we're young that seem quite selfish in retrospect and I think that's just the normal cycle of things. At that point in our lives we only think about ourselves, but maybe we need to do that, as it's part of the process of actually growing independent. Perhaps you wouldn't have moved out at all otherwise!
(I said some truly terrible things to my mum when I was around that age... aargghh.)
As for the photo, it's fantashtic!

Like Marie said, this one hits home on both counts... the leaving home and the selling of records... especially the records. For example, when I was in my last year of high school I sold off all of my Smiths 12" singles so I could have a fancy prom night with my girlfriend. At least I can say we are still together... I guess. HA!

First time I have heard this bleeding excellent it is too!
This is some undertaking TS and great memories there too. I remeber when I left home and my mother sent me a food parcel, the cost of the postage was probaly far more than the contents. Bless her!