The move in December 1983, took me even closer to London. It meant that the time it took from locking up the shop to arriving at a gig could be as little as an hour, depending on the venue, even less on a really good night. In 1984 my car could almost have done the journey down the M11 on auto-pilot. A wave of American bands, dubbed 'The Paisley Underground', began releasing records and traveling to our shores to play well received concert tours, while expensive, guitar drenched imports hit our racks from the far distant lands of Australia and New Zealand. All in all, there are any number of tunes I could choose to represent this busy musical year. 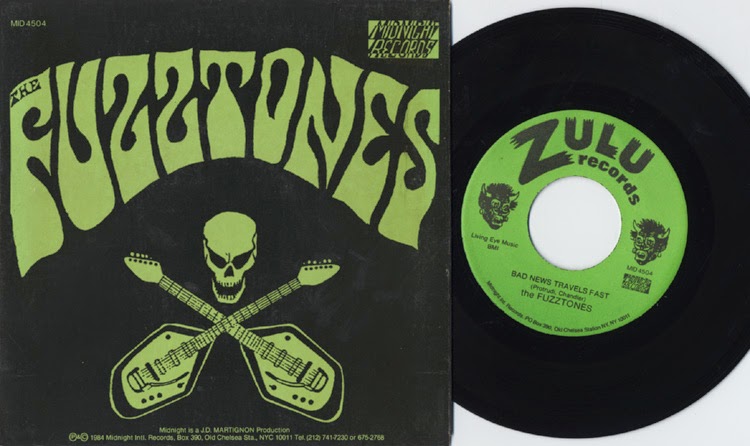 Here's one - the terrific 'Bad News Travels Fast', US import debut 45 by The Fuzztones, which for a time was a hugely popular racket behind our counter. With at least 50% of the staff anyway.

Playing this song has somehow enticed my partner to start dancing about the living room. I, of course, remained seated, a cat remained on her cushion, ad the dogged wagged her tail

Thanks for the update George - keep me posted on further developments!

Swede, I feel like there is a little resurgence in fandom for the Fuzztones, which is really cool. They have been popping up on blogs quite a bit lately. You're into the years when I became obsessed with music (was 14 in '84), and I was really into this West Coast scene. It's interesting to me to think about folks from your shop across the pond enjoying it too.